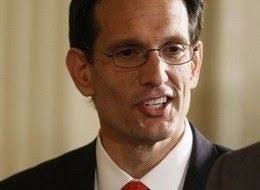 Many of you have probably seen the video clip recently shown to his caucus by the poor excuse for a Majority Leader of the House of Representatives. He used the clip to “motivate” and incite his members to hurt Americans.  If you have seen it, you know that this man has shown today’s Republican Party for the sadists they are.  This is not exaggeration. Despite the violence in this clip, I urge those who have not seen it do so. Otherwise, you can’t grasp the depravity of Cantor and his caucus. (There’s more to the clip than what most media folks acknowledged.)

The clip, from the violent bank robbery movie “The Town,” shows the character played by Ben Affleck saying:

“I need your help.  I can’t tell you what it is.  You can never ask me about it later.  We’re gonna  hurt some people.”

The footage then shows the character Affleck character, and another character in the film, donning hockey masks, sledge hammering in a door and relentlessly beating the inhabitant(s) with clubs.  In what kind of parallel universe is this acceptable?

Here’s Sen. Chuck Shumer’s response. Notice, though, how Shumer watered down what the clip actually said.

As they use brinkmanship to bring down our economy, the Teapublicans, for whom Cantor is a self-proclaimed “young gun,” have reached new depths of ruthlessness and cynicism. Whatever it is used to be, today’s Republican Party is now something else entirely.  As Lowkell showed in another blog here at BV, even conservative (I-am-not-really-a-maverick) John McCain is disgusted with his party. You know its bad when Charles Krauthammer is also disgusted with his party too.

Cantor has moved from nasty, snot-nosed, weaselly, preppy opportunist to nothing short of a thug. He blights the Congress, his office, his once legitimate party and the State of Virginia. Who elects people like this? He needs help, but not the political kind. There is no better proof that this man is unfit to be a Republican leader in the House (or a “leader” anywhere else).  Anyone cheering this sadistic behavior should be removed from office at the nearest opportunity.

By using this clip to motive and incite his caucus, Cantor just showed for all the world to see what today’s TeaPublicans are all about: Hurting most Americans. Had enough? Let your voice be heard. (PS: We cannot “negotiate” with TeaPublican economic terrorists.)