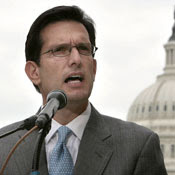 Okay, we get it, you want a “balanced budget.” But aren’t there better ways to reduce America’s deficit and swipe away its debt than to put a gun to head of the U.S. (metaphorically speaking of course!)? Doubtless there is. But most conservatives and some within the libertarian fold see this moment in America’s history as “the” time to clean up our economic house.

I feel as though I’m in a cubist painting, unable to grasp the full dimensionality of what the Republican Party and its followers are truly hoping to accomplish. Don’t they see that their gamble could essentially throw America into an economic tailspin, the likes of which we may never fully recover from? I have to believe that these individuals are not so reckless. I have to believe that these individuals simply see the current political situation in an entirely different way than I do.

What is absolutely clear is that these individuals on the right of the political spectrum have become completely blinded by their “balanced budget” ideology and their fiscal conservatism, so much so that anything that seems to them to go against this dogmatic policy position should be fundamentally and totally rejected. Compromise? Nope, not on your life. They don’t understand the meaning of the word.

The biggest curse and the biggest blessing of being a liberal is that compromise is built into our political ideologies. Compromise is not a bad thing, it’s what makes a republic function without dissolution. But all too often, those of a conservative political persuasion, in particular, look at compromise as “unmanly,” or whatever non-masculine term they wish to pluck from their limited lexicon.