In the melodrama that is consuming Washington this hot summer, featuring the spectacle of how much Tea Party Republicans will be able to extort for agreeing not to blow up the economy, the values and priorities of most Americans were early casualties. That reality will drive – no matter what the resolution this week – new, independent citizen mobilizations challenging both Republican zealotry and Democratic cravenness.

So begins a powerful column, one worth sending to every federal elected official.  The Members of the Congressional Black Caucus and the Congressional Progressive Caucus probably already grasp the message – they have an 11 AM presser this morning where it is expected that they will go on record opposing the “deal” just “negotiated” – a “dea”l with no commitment to additional revenues from those who can afford it and too much burden put on the backs of the middle class and the poor;  a “deal” that distorts democracy with its “triggers” and its automatic cuts to what little is left of discretionary funding;  a “deal” that requires additional votes for political posturing – on a balanced budget amendment that has no chance of achieving the 2/3 majority in the Senate necessary to send an amendment to the states and which in its very conception is a total distortion of the original understanding of the functioning of the Federal government.  Grover Norquist’s wet dream of a government small enough to drown in a bathtub is about to become reality by this ‘deal.’

vanden Heuvel writes about how Americans want jobs – this “deal” will cost jobs;  how Americans don’t want a cut of services to poor people and children – that is one inevitable outcome of this “deal.”

She thinks Americans will pay attention and then

realize just how divorced both parties are from basic common sense.

But that’s just the start.

Her third paragraph is an apt discussion of something totally demoralizing and/or angering most progressives right now:

Equally inexplicable is the president’s apparent eagerness to negotiate with a legislative faction willing to hold the entire economy hostage – and one prepared to extort concessions in backroom deals that it could not achieve in any normal legislative process. Negotiating with fiscal terrorists only encourages them.

And whatever the final details of the “deal” will be, vanden Heuvel notes

they will be remarkably cruel. As Robert Greenstein, the respected director of the Center on Budget and Policy Priorities, noted last week that every plan on the table now is far worse – cutting more from programs for the poor, exacting pain on the most vulnerable in our society – than anything Jim DeMint, the most extreme right-wing senator of all, was demanding last year.

Think about that now.  Go back and look at DeMint’s 2010 demands.  This administration so succeeded in negotiating against the interests of its supporters that not only did the Tea Partiers give up nothing of their original demands – beyond the extreme fringe’s insistence on no increase in the debt limit at all – they got more than their champion was willing to argue for less than a year ago.

vanden Heuvel quotes from poll data that makes it absolutely clear that the American people want a very different approach, one including increase taxes on the rich and on hedge fund managers and oil and gas companies.  They trust Obama quite a bit more than Congressional Republicans – although that last data is derived from polls prior to this “deal.”    She notes the recent polling data showing an erosion of the President’s support – she writes about his base, but one could as easily write about independents, despite Obama’s attempts to position himself as the “adult” who is not being extreme.

Where I may disagree somewhat with vanden Heuvel is her assertion that this agreement will stoke public anger.  I’m not sure.  It could as easily feed public despair.  Yes, there is the American Dream Movement led by Van Jones, but will it have an effect? What happens if people try to go into the streets?   Will the authorities arrest the masses were there an attempted occupation of the US Capitol as there was that of Wisconsin?  Already the building of our national legislature is far less accessible than was that in Madison.  The Police responsible for its security are not yet feeling the pressures that those in Wisconsin were, which made them sympathetic with the graduate assistants who led the occupation in Madison – as I write this I hear my sister-in-law, spending the summer with us with a fellowship at a museum, making coffee:  she was one of those graduate assistants.

I hope vanden Heuvel is correct about the anger of the American people.  In Wisconsin it has led to the recall movement. In Ohio it has lead to the more than a million signatures against an obnoxious bill preventing it from going into effect until it is subjected to a popular referendum.  At the federal level we lack both recall and referendum.  We have no DIRECT power except biennial – and in the case of Senators every six years – elections.  We are perhaps in some states less than a year away from primaries.  Republicans have been running scared of possible Tea Party challengers.  Yet there are fewer tea party partisans than there are progressives, just as there were before the 2010 election fewer Blue Dogs in the Democratic caucus than there were Progressives –  and the numbers now are skewed even more heavily progressive.

vanden Heuvel concludes her op ed with this paragraph:

In the August recess, the heat legislators encounter back home won’t come from the weather alone. The Tea Party captured the populist anger in 2010, representing a small fraction of the population. In 2012, legislators in both parties may just encounter a populist uprising that represents an American majority.

Will that happen?  We can only hope.

The Democrats,led by the President, allowed the negotiations over the debt limit to go on far too long.  Realistically, little else was getting done in the past month or so.  Realistically, we should have had either a clean debt bill or one that at least included significant revenue increases to pay for the programs Americans need, to pay for the stimulus necessary for job creation.

I will go further than vanden Heuvel.  Two months ago the President should have insisted on one or the other, knowing (a) the House would refuse to consider it, and (b) Senate Republicans would threaten a filibuster.  Reid and company should have taken an existing House bill (since this legislation must start in the House, at least nominally), stripped it out by amendment by substitution and put forward a clean bill, and/or one with revenue.  The Republicans would have threatened a filibuster.   Good.  Call them on it.  Force them to actually filibuster.  Let the American people see them as the party of  “no.”  Have the likes of Jim DeMint arguing we can’t raise taxes on the wealthy and we have to slash social security and medicare and medicaid.  Have that the argument on national television, have that the focus of the media.  As the Republicans put forth the likes of McConnell and Mike Lee of Utah and DeMint and others of such ilk, let the Democratic argument be made by Bernie Sanders, by Kirsten Gillibrand, by Sheldon Whitehouse, by Al Franken.

Give the American people the opportunity to see and choose.  Watch the resulting poll data.  At least then the administration would have been standing for traditional Democratic values.

I think the Republicans would quickly have caved, and the dynamics of the next election would have been set – in our favor.

I think the American people would have approved of the People’s Budget of the CPC had they ever been given a chance to consider it.

I think this “deal” betrays not only Democratic principles, but the American people in favor of the crazies, the greedy, those who do not believe in democracy.

I thank Katrina vanden Heuvel for her column.

Now, isn’t it time we took to the streets?

Or have we already lost hope? 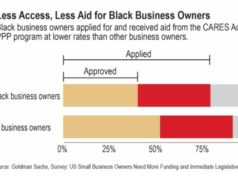 Latest Data Shows Trend Toward Economic Recovery, but Black Workers and Businesses are Being Left Behind