Why is the stock market falling? You really can’t get much clearer than this explanation by Moody’s Chief Economist Mark Zandi (on Face the Nation this morning):

Well, we got hit by a string of unfortunate events [$4 per gallon, Japanese earthquake] but most significantly it’s the debt ceiling drama, the spectacle in Washington, and of course the S&P downgrade, I think completely undermined confidence. And we were already very nervous coming out of the Great Recession, and this was too much for us to get our minds around, so I think we’ve all frozen, and that’s reflected in these wild swings in the declines in the stock market….

And just to remind everyone, since I saw Ed Gillespie spewing out his Big Lie this morning (e.g., trying to blame the Republican Great Recession on the Democrats!), the “debt ceiling drama” was caused 99% (I won’t say 100%, just because I’m sure there’s 1% blame to go around) by the Teapublican’ts in Congress. THEY are the ones who insisted on tying a normally routine/technical increase in the debt ceiling (dozens of times under Republican presidents including Reagan and both Bushes) to their policy hostage demands on ALL spending cuts and NO revenue increases. Nobody should ever forget that, despite the barrage of Big Lie propaganda the Teapublican’ts are sure to spread this election cycle.

Bottom line: this economic mess started under President Bush, and has been worsened by the refusal of the Teapublican’ts to enact sensible, stimulatory policies in the short run (as any economics student learns at the “101” level), and to simultaneously tackle the long-term, structural deficit ($400 billion a year of which comes from the foolish Bush tax cuts, which should be repealed outright, combined with spending on two unpaid-for wars, which should end as soon as possible). 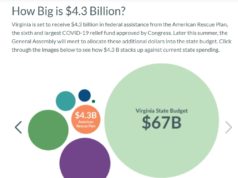 How Should Virginia Allocate $4.3 Billion in Federal Funds From the American Rescue Plan? A Special Session of the General Assembly Will Consider This...