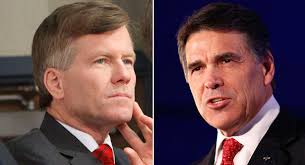 Remember how Bob McDonnell ran in 2009 as a moderate, “Fairfax’s own,” “Bob’s for jobs” and all that baloney? (people actually BELIEVED him?!?) Well, guess what? Not that this is surprising in any way, given McDonnell’s education at Pat Robertson U., but it was all a Big Lie. Now, McDonnell’s open-armed welcome of secessionsist theocrat extremist Rick Perry, who believes that Social Security’s a “Ponzi Scheme” (and who holds many other bat**** crazy beliefs), demolishes any lingering doubt on the subject. See below for the press release from the DPVA for more:

In case you missed it, Governor McDonnell will be hosting a fundraiser with extreme right-wing tea party presidential candidate Rick Perry on September 14th at the Richmond Convention Center Grand Ballroom.

“It’s troubling that while Virginia families are struggling to make ends meet, Governor McDonnell would align himself with an extreme tea party presidential candidate  who recently referred to Social Security as a Ponzi scheme,” said David Mills, Executive Director of the Democratic Party of Virginia.

“We need a Governor whose number one priority is creating jobs and opportunities for the people of Virginia not cozying up to someone whose idea of patriotism is seceding from the union.

“McDonnell continues to put his political ambitions above the well-being of those he was elected to govern. Just another example of Bob being for Bob.