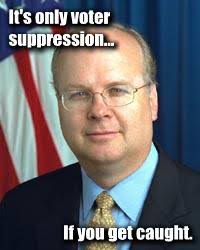 The following press release from DPVA raises serious questions about what shenanigans Republicans are up to in Virginia with regard to suppressing the vote in 2011 and 2012. As the press release notes, “This is Bob McDonnell’s contribution to a nationwide attack on the constitutional right for qualified citizens to choose their government at the ballot box.”

Suppressing the Vote in Virginia

McDonnell’s State Board of Elections pushes regulations to disqualify votes due to poor handwriting.

In case you missed it The Virginian-Pilot ran an article today outlining how new voting regulations could make it harder for Virginians to exercise their right to cast a ballot and choose their leaders.

“This is Bob McDonnell’s contribution to a nationwide attack on the constitutional right for qualified citizens to choose their government at the ballot box,” said Democratic Party of Virginia Spokesman Brian Coy. “The Governor talks a big game about expanding voting rights in Virginia, but these regulations are a clear effort to limit the number of people who have a say in the outcome of our elections.”

“The State Board of Elections should defend a Virginian’s right to vote, not erode that right to the point where a person can lose their franchise based on how they cross their ‘T’s’ or dot their ‘I’s.”

Not good at all. Democrats, are you awake? If so, you’d better speak out about this! If not, they’ll likely get away with it.