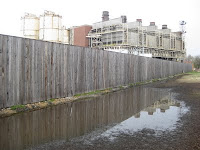 There’s been a wave of closures recently at the oldest, dirtiest, most-polluting coal-fired power plants, including GenOn’s Potomac River Generating Station in Alexandria and Dominion’s Chesapeake Energy Center and Yorktown Power Plant. At Grist.org, David Roberts says we should be celebrating the death of these power plants that we’ve been subsidizing at the cost of asthma attacks and heart failure:

The key thing to remember is that these are some of the most heavily subsidized jobs in the U.S. economy. They are subsidized at a level that makes anything Obama did with the stimulus bill look like pocket change.

Why is that so? Well, it’s widely known by now, at least in economist circles, that the coal power industry grossly underpays for the damages it does. That’s the unanimous conclusion of a flurry of new research that’s been done on the question: see, e.g., the National Research Council (NRC), Harvard Medical School’s Paul Epstein, or last week’s bombshell from Yale’s William Nordhaus and colleagues, which found that coal-fired power plants do 21 cents of unpaid damages for every single kilowatt hour of power they produce. Economists call these costs “externalities,” but really they amount to subsidies — the public is paying these costs on the coal companies’ behalf. […]

And these subsidies are not investments that pay back over time, like loans to innovative renewable energy firms. These subsidies come in the form of babies with birth defects, asthmatic kids, and adults with respiratory and heart ailments. These subsidies pay negative returns. They subtract value. All in the name of propping up a dying industry.

The Alexandria plant alone was estimated to kill 37 people & sicken hundreds of others every single year. But the coal industry keeps looking for someone to blame, and it’s not just on the human costs of its pollution. As Coal Tattoo’s Ken Ward Jr. reports, coal companies are desperately trying to pin falling Appalachian production on regulations & conservationists. That’s instead of accepting the simple fact that the low-hanging fruit of Appalachian coal has long since been picked and what little is left is getting more & more expensive to blast out. For today’s coal industry, reality is hard to face.