(Excellent diary, thanks for posting! – promoted by lowkell) 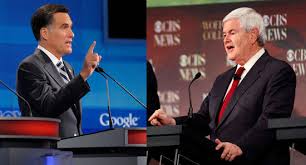 Who will be the Republican nominee for president in 2012?

But the Republican base is conspicuously not flocking to Romney’s banner. As is often observed, Romney consistently polls at around a quarter of the Republican electorate. He is a front-runner without a bandwagon.

The Republican base, having turned from one un-Romney candidate to another, has now alighted on Newt Gingrich. Will the “Not Romney” crowd stick with Newt?

Jed Lewison thinks they might: Gingrich is unlike the other un-Romneys, Lewison observes, in that he was already well known to the base at the time of his surge. The idea is that because there will likely be no major revelations, Newt may be able to stay atop the field as the alternative the base has been holding out for.

To me, all this looks like evidence in support of the famous line, attributed to Otto von Bismarck, that “God has a special providence for fools, drunks, and the United States of America.” For the dynamics of the Republican field may preserve us from having another president from the benighted and destructive force that party has become.

Consider first Newt Gingrich. If it’s true that Newt will be protected from the precipitous falls that took Perry and Cain down by the fact that his skeletons are already out of the closet, it’s nonetheless also true that Newt Gingrich is manifestly one of the most craven and unsavory characters ever to stain the political stage.

His tawdry conduct in his marriages, his sanctimonious denunciations of an impeached president at the very time he was engaged in conduct still more reprehensible, and his brazen money-grubbing and influence peddling are but part of the ugly picture.

Worse still: Newt Gingrich was one of the main originators — along with Rush Limbaugh — of the deeply toxic right-wing transformation of American politics into mere war by another means.

It was Gingrich who decided to use propagandistic tactics to associate “liberal” with “abnormal,” and in general to demonize those on the other side. It was Gingrich who dishonestly sought to tie Susan Smith, the woman who drowned her children in a South Carolina lake, to alleged “liberal” amorality — despite the fact that, as it turned out, Ms. Smith was the step-daughter of a prominent Republican who had sexually abused her.

A compendium of statements manifesting Gingrich’s viciousness would not be brief, and he regularly provides new entries.

Today’s Republican base might nominate this nasty liar and hypocrite, though I have strong doubts. But even if they do, it seems hard to imagine the American people would elect Newt Gingrich president over a decent man like Obama, despite the condition of the economy and uncertainties about Obama’s leadership.

So what about Romney? If he does get the nomination, it is clear that he will be hampered by two important liabilities.

First, he will not have an enthusiastic base. Republicans will be less eager to vote, work, and donate.

Second, it seems that it is widely understood on both right and left that Romney is willing to say ANYTHING to win the presidency. Politicians are expected to bend and twist their positions a bit to win votes, but Romney has taken a lack of integrity about his positions and principles to a whole new level.

Romney’s willingness to pander to the nuttiness of today’s Republican base has been so blatant, in fact, that it is not clear that he’s fooled anybody.

Which leads me to wonder: might Romney have been better off if he’d remained consistent?

The Republican base would of course not think him to be one of them, but they clearly don’t claim him as their own anyway. And at least then, having made a plausible case for his being a person who believes in something, he’d have more than just his naked ambition to take to the voters.

At this point, though the Democrats do not have the strongest hand to play in the presidential game, the Republicans seem to have no good cards in prospect.

Andy Schmookler is running for Congress in the 6th Congressional District of Virginia, challenging the incumbent Congressman, Bob Goodlatte. An award-winning author, political commentator, radio talk-show host, and teacher, Andy moved with his family to Shenandoah County in 1992. He is a graduate of Harvard University and holds a PhD from the University of California at Berkeley.