This is the final installment in my series of holiday messages, discussing several important imaginative works that have become deeply woven into how Christmas is celebrated in American culture. These works connect with Christmas, and they connect with the moral heart of America. And moreover, the issues they raise are central to the crisis that we Americans now face in the political realm, and that are at the heart of my campaign for Congress.

This installment has two parts: one dealing with the film “Miracle on 34th Street” and one with the placement of Christmas at the time of the Winter Solstice. 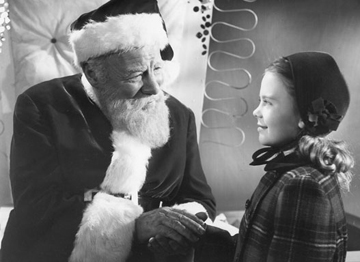 UNDREAMT OF IN YOUR PHILOSOPHY: MIRACLE ON 34TH STREET

The central issue in Miracle on 34th Street is what kinds of forces are at work in the world, and more specifically, whether the prosaic view of common sense captures everything we need to know about what’s possible.

The film pivots around two characters: one is an attractive woman, played by Maureen O’Hara, and an elderly bearded man (played by Edmund Gwenn) who claims to be Santa Claus. The old man’s claim to be Santa Claus is an assertion that the world contains magic and mystery. The woman, by contrast, is heavily invested in the idea that the world is just matter-of-fact and commonsensical.

We, the audience, are continually encouraged to root for the idea that there is more in heaven and earth than is dreamt of in her philosophy.  And eventually it comes out that her rejection of life’s magical element is the fruit of her past bitter disappointment in romance.

Two other people in the story depend upon the outcome of the tension between these two worldviews. A young man has a romantic interest in the woman who resists romance, and the woman’s young daughter is enchanted with the wonderful, warm-hearted Santa Claus, and struggling to reconcile what she sees and experiences with the imaginatively sterile vision of things she’s being taught by her mother.

The miraculous, of course, wins out over the sterile. To our great delight.

And what does this have to do with Christmas?

It’s more than that the man is claiming to be the Kris Kringle that happens to be associated with Christmas. It’s about the idea that more is at work in the world than the prosaic and commonsensical.

The world appears, in the Christmas story, to be fully under the dominion of the brutal Romans and the corrupt rulers they have installed.  But there’s another kind of power that can enter the world, and that other kind of power is represented by a baby being born in a manger.

That this other kind of power is a threat to the conventional power of kings and armies is shown by the reaction of the corrupt Herod who wants the child found so that he could destroy it.

In human affairs, sometimes the mundane course of events is disrupted by a spiritual power that operates by means other than swords and gold.

At the conclusion of Miracle on 34th Street, the life of the skeptic is transformed by the operation of magical powers she had said could not exist. Kris Kringle helps her find true love, and her daughter to grow up in the home of her dreams. Impossible, in terms of common sense. But possible in the world where unseen forces can work miracles.

And how does that relate to our campaign, and to the larger question of People Power defeating the Money Power?

Common sense says that someone running as a Democrat in a District that is so heavily Republican as the 6th District cannot win. But there are forces that can be tapped into that can upset the obvious expectations.

Within the human spirit, something can be kindled.

A young man immolates himself in Tunisia, out of despair for his life in a corrupt society, and thus ignites also a movement across that part of the world that has already toppled three governments and may yet topple more. Common sense would never have seen the possibility.

Here, in these dark times in America, there is in many of our countrymen a yearning for a renewal of the goodness and effectiveness of our political process.  That yearning is an expression of the spirit, and the spirit is capable of changing the world in ways not unforeseen through the usual calculations.

Where is the power to be found in America today? That question can be answered in terms of dollars, in terms of red or blue districts, in terms like those that made Herod king. But it may be that the answer will lie elsewhere, in the kindling of the spirit.

Let the Herods of our times tremble, for this could be one of those times when the seemingly miraculous overturns the seemingly solid

SOLSTICE: MAKING THE TURN FROM DARKNESS TO LIGHT

Christmas comes around the time of the winter solstice.  That’s not coincidence, but is tied into the meaning of the holiday.

That the birth of Jesus is celebrated at this time of year is NOT because anyone found a birth certificate indicating that he was born in the latter part of December.  There was no birth certificate, and it’s generally understood that this time of the year was chosen by Christians for reasons that connect with the fact of its being the solstice.

The winter solstice is the time of greatest darkness: the night is at its longest, the day at its shortest.  The solstice is also the time when light begins its ascendancy: the days now begin to lengthen.  In many cultural traditions, holidays around the time of the solstice put an emphasis on lights-the lights and candles of Christmas being one such instance.

The time of year when light begins its comeback is a fitting time for celebrating the birth of a child whose story culminates in redemption.  At the darkest time, the light begins the process of recapturing the world.

So it is with our political crisis, and with this campaign. This is a time where darkness has been dominating in the realm of power in America. The solstice and the Christmas season are fitting occasions to commit ourselves to helping making the turn back toward the light.

VA GOP Week in Review: Life, Liberty, and the Pursuit of Parking Spots