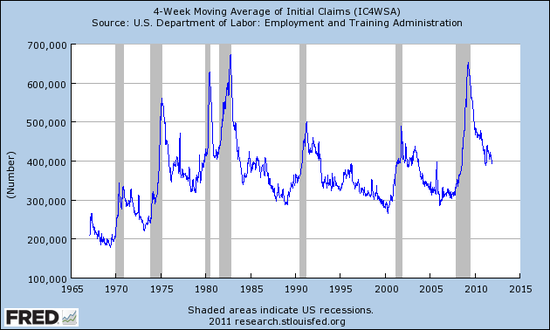 Another day brings yet more encouraging economic news, as President Obama and the Democrats continue to dig our country out of the ditch that Dubya and the Republicans (including George Allen, Eric Can’tor, etc.) left it in following their rein of budget busting and “let Wall Street run amok” during the 2000s.

The number of people applying for unemployment benefits dropped to the lowest level since May 2008, a hopeful sign that layoffs are declining and hiring is picking up.

The Labor Department said Thursday that weekly applications fell by 19,000 to a seasonally adjusted 366,000 last week.

Remember, Barack Obama and the Democrats inherited an economy in free fall when they took charge in late January 2009. By the time the American Recovery and Reinvestment Act of 2009 was signed into law on February 17, 2009, and by the time the “stimulus” actually started kicking in (many parts of it took months if not longer to have an impact), the unemployment rate was soaring towards 9% and (well) beyond. That’s a fair point to start counting the Obama economic record. Since May 2009, for instance, when unemployment was at 9.4%, the rate has now fallen 0.8 percentage points, to 8.6%, and the latest data on new claims for unemployment benefits is highly encouraging that this rate will continue to fall in coming months.

By the way, the budget deficit’s falling as well. Keep in mind that when Barack Obama took office, the projected  deficit for 2009 was $1.2-$1.3 trillion. This year, the budget deficit is projected to be down to $973 billion. Obviously, that’s still very high, but remember, it would have been a LOT lower if the Republicans had allowed the Bush tax cuts for the wealthiest Americans to expire in 2010, as they were supposed to (by the law that Republicans voted for, and that George W. Bush signed). If we got rid of all the Bush tax cuts, that would save us $4 trillion over the next decade, or $400 billion per year, sharply reducing the deficit. In addition, deficits would be a lot lower if it weren’t for the recession that we inherited from the Republican’ts, and the urgent need for aid to the unemployed, as well as other measures to help the economy recover. Finally, I’d point out that the long-term budget situation also would be a great deal better if Republican’ts like Eric Can’tor hadn’t pulled out of negotiations last summer on the debt ceiling increase, as President Obama and Speaker Boehner were negotiating significant deficit cuts.

Bottom line: Democrats are slowly but surely digging the country out of the mess the Republican’ts – Bush, Allen, Can’tor, etc. – left us in. As time goes by, this trend is likely to continue, as long as Americans aren’t foolish enough to hand the keys back to the people who drove us into the ditch in the first place.