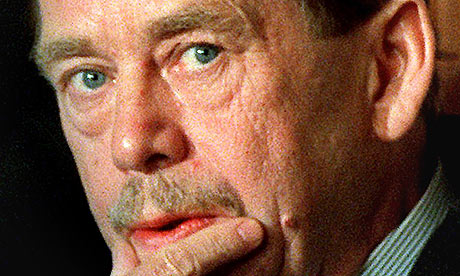 “Just as lies and corruption are contagious, so, too, moral truth and bravery spreads from one champion to another.” So writes Jeffrey Sachs, in an article commemorating the life of Vaclav Havel.

“Havel and Michnik could succeed,” Sachs continues, ‘in part because of the miracle of Mikhail Gorbachev, the Soviet leader who emerged from a poisoned system, yet who valued truth above force. And Gorbachev could triumph in part because of the sheer power of honesty of his countryman, Andrei Sakharov, the great and fearless nuclear physicist who also risked all to speak truth in the very heart of the Soviet empire – and who paid for it with years of internal exile.

These pillars of moral leadership typically drew upon still other examples, including that of Mahatma Gandhi, who called his autobiography The Story of My Experiments With Truth. They all believed that truth, both scientific and moral, could ultimately prevail against any phalanx of lies and power.

Many died in the service of that belief; all of us alive today reap the benefits of their faith in the power of truth in action.

Havel’s life is a reminder of the miracles that such a credo can bring about; yet it is also a reminder of the more somber fact that truth’s victories are never definitive. Each generation must adapt its moral foundations to the ever-changing conditions of politics, culture, society and technology.

Havel’s death comes at a time of massive demonstrations in Russia to protest ballot fraud; violence in Egypt as democratic activists battle the deeply entrenched military; an uprising in rural China against corrupt local officials; and police in body armour violently dismantling the Occupy protest sites in American cities. Power and truth remain locked in combat around the world.

Much of today’s struggle – everywhere – pits truth against greed. Even if our challenges are different from those faced by Havel, the importance of living in truth has not changed.

My thanks to Rex Wilkins for referring me to this article. Mr. Wilkins also, in a previous posting on my campaign Facebook page here  — generously connected my campaign with the values expressed Vaclav Havel’s famous speech about “Intellectuals and Politics.”

In the passages from that speech, from which Mr. Wilkins quoted, Havel said this:

Does an intellectual – by virtue of his efforts to get beneath the surface of things, to grasp relations, causes, and effects, to recognize individual items as part of larger entities, and thus to derive a deeper awareness of and responsibility for the world – belong in politics?…Never before has politics been so dependent on the moment, on the fleeting moods of the public or the media. Never before have politicians been so impelled to pursue the short-lived and short-sighted.

And he also said this:

[T]he less our time favors politicians who engage in long-term thinking, the more such politicians are needed, and thus the more intellectuals – at least those meeting my definition – should be welcomed in politics.