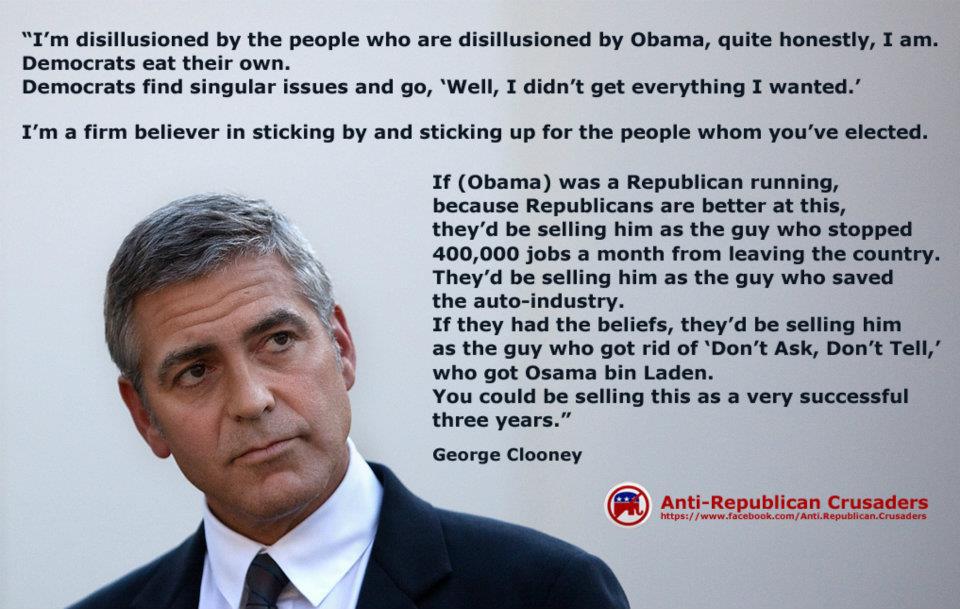 Here are a few Virginia news headlines, political and otherwise, for Sunday, December 18. By the way, I agree with George Clooney on his quote to the right (click to “embiggen”). How about you?

*House GOP revolts on payroll deal (Eric Can’tor and his merry band of extremists/wackos in the House of Representatives appear well on their way towards screwing up the payroll tax cut deal that just passed the Senate overwhelmingly, meaning a possible tax increase on the vast majority of Americans in 2012. Great job, guys!)

*Warner setting his sights on debt

*Global-warming skeptics in tidal Virginia (Proof that the paranoid and ignorant, if they’re loud enough, can actually influence policy. That’s highly unfortunate, but sadly, it’s always been that way and probably always will be. What’s really scary is that these people have, de facto, taken over the U.S. House of Representatives and have largely stymied the U.S. Senate. Now THAT is a problem.)

P.S. Oh yeah, and it looks like Newt is toast, with his poll numbers plummeting, with the endorsement by SC Gov. Nikki Haley of Mitt Romney, and with the Des Moines Register endorsement of Romney. It’s a shame, because Newt would have been an incredibly weak general election candidate against Barack Obama, probably losing in a landslide of Goldwater-esque proportions. Now, I still think Obama will beat Romney (see the Iowa Electronic Markets, which also favors Obama over Romney), but it will be much tougher. Looks like we’ll be busy in 2012!