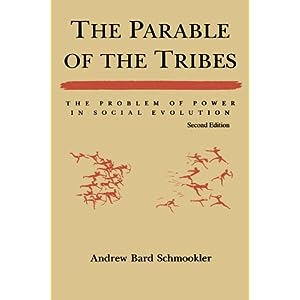 “Throw ourselves into the battle.” That is what I said here, once before, is required of us. But for many of us, fighting does not come naturally. Nor is it an appealing way to spend our energies.

In large measure, that is to our credit. We are capable of living richer, fuller lives than those who are dedicated purely to battle and to the struggle for power.

But history does not always give people the choices they would prefer. That is true for us in America today. We are in the position that I explored years ago in the book I consider the most important thing I’ve written, The Parable of the Tribes: The Problem of Power in Social Evolution.

What I said there was that throughout history, peoples have been compelled to confront others who were bent upon expanding their own power. These confrontations have forced upon those who were threatened the undesirable choice: either fall under the domination of the aggressors, or match their power in order to defend yourselves and what you hold dear.

The option of just going on as you were before – which is the choice that truly healthy people would most prefer – is no longer available.

That is the tragic situation we Americans now face. On the political right there has arisen a force like nothing seen before at center stage in American politics. It is one that seems to care about nothing but its own power. It makes a fight out of everything. It tramples on everything that has made America great.

And it must be defeated.

For a generation, we Democrats, we liberals, we progressives, we with the more humane set of values have been out-organized, out-fought, out-messaged by this force that is degrading America.

While we’ve been living our fuller, more rounded lives, this force on the right has hollowed out the middle class, debased our public discourse, brought out the worst in our neighbors, undermined the rule of law, placed our descendants in greater peril of ecological catastrophe, besmirched America’s good name in the world, embroiled us in needless wars, driven our economy into a pit, and magnified the ability of corporate power to steal our democracy.

These are the costs of our sleeping through the battle we need to be fighting. We can afford to sleep no more.

I, too, would rather not have to fight. I would much rather be contemplating the good, the true, and the beautiful rather than, as I have for the past seven years, the bad, the false, and the ugly.

But I am running for Congress because I can see a possibility for striking a meaningful blow in this battle (as I described it in a previous posting). And I feel morally obligated to do everything in my power to turn our present dangerous political dynamic around.

Just as my father’s generation had to set aside lives they would have preferred to lead – richer, fuller, more humane than fighting their way across France or the islands of the Pacific- in order to defeat a destructive force that had arisen in Europe and Asia, so too do I feel a moral responsibility to sacrifice my ease and comfort to defend the same values here at home.

The stakes, as I see it, are just as high.

What is the alternative to answering that call of duty to fight to protect what’s best about our country? Would I wish to answer my grandchildren were they to ask someday, “So you didn’t much trouble yourself while America became the kind of society we have always abhorred – ruled by greed and the lust for power, deceived by propaganda masquerading as news, exploiting rather than serving its people?”

No, I too would rather not have to fight. But history sometimes compels us to choose among options that don’t include the one we’d favor most.

So here we are back again at the line with which we began: “Throw yourselves into the battle.” And I hope you will choose the battle I am waging as the best place for you to make your contribution.

Join forces with me. Volunteer your talents and time and energy. Give a financial contribution to the campaign.

Thank you for whatever help you are moved to offer.