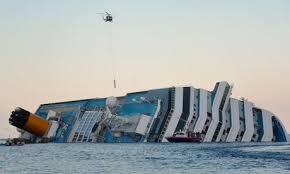 Could Governor McDonnell, and the VA GOP establishment, be setting up a situation where Ron Paul defeats Mitt Romney in the VA presidential primary? The bookies in Las Vegas say it can’t happen, and so does LG Bill Bolling, the head of the former Massachusetts Governor’s campaign.

This is not to suggest that the U.S.S. Mitt Romney is like the ill-fated Costa Concordia cruise ship,

But Governor McDonnell surely needs to have that analogy in mind as he heads to South Carolina to campaign for the VA GOP establishment’s choice for President, Mitt Romney. Frankly, it would make more sense for the Governor to jet on down to the Cayman Islands and close up the offshore account Mr. Romney has – amazingly – kept open in that tax-avoidance haven. What was/is Romney and his campaign team thinking? Did they not see the Cayman Island scene from the movie “The Firm”?

Precisely why Team Romney thinks it was okay to run for President with a Cayman Island active connection defies logic. What is wrong with your local banker, especially if you are the guy running as the friend of Main Street and its economy?

Yes, Mr. Romney is free to do what he wants with any money earned fair and square. Nor should he apologize for his success or the profit motive.  But that misses the point. Romney clearly made a choice: he wanted to keep the benefits of his Cayman Island banking AND BE PRESIDENT. Political logic says the choice was always one or the other,  but NOT both.

Which brings us to Governor McD and the VA GOP establishment, now ALL IN on Romney.

When McD booked his flight, Romney had a double-digit lead in the polls and even Rush Limbaugh, no fan of the former Massachusetts Governor, was defending the Mittster from charges being hurled by Newt Gingrich.

Now, the polls say he could lose tomorrow to Newt Gingrich.

If that happens, the ABR – Anybody but Romney – conservative posse is going to go all out to deny him the nomination. This means the VA presidential circus, in one form or another, is going to reach Virginia full-on during Super Tuesday in March.

Governor McD and the VA Establishment no doubt believe they are in a win-win, no-lose,

position under any scenario, since the VA GOP primary only has Romney vs Ron Paul on the ballot. So they’ve got to figure: even if Romney stumbles tomorrow and then in Florida shortly thereafter, it doesn’t matter in terms of VA.

Meaning: Romney is a safe play for them, net-net.

Earth to the VA GOP: As I have written before, under the right circumstances, Congressman Ron Paul could defeat Mr. Romney in the VA GOP presidential primary, since if the GOP circus is still going strong as it comes to Virginia, why wouldn’t the ABR forces join together to help Congressman Paul win? Their campaigns would be guilty of political malpractice for doing anything less. Why concede such a large delegation to Romney when delegates, not primary wins, ultimate decide who gets the GOP nomination?

Bottom line: Governor McD and the VA GOP establishment have thus given the ABR forces a perfectly valid excuse to back Ron Paul. As the saying in politics goes, there are no permanent allies, just permanent interests.

Now, McD et al. have set up a situation where the ABR grassroots might want to embarrass the Governor and the VA GOP party establishment for their backing Romney.

The ballot mess bottom line: Depending on the next 36 hours or so, the Vice-Presidential hopes of the Governor, along with the gubernatorial dreams of LG Bill Bolling, could be the real issue on the ballot in VA next March.