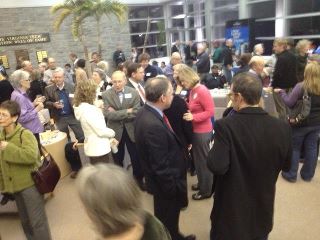 About 150 Montgomery County Democrats happily gave up their Friday evening to welcome former governor and US Senate candidate Tim Kaine to Blacksburg yesterday. The event featured a lengthy opportunity for local Dems to personally greet the former governor, share their thoughts, and hear his vision for the 2012 campaign.  It was also a great opportunity for collecting signatures for the petitions to get Kaine on the ballot.  (What is the matter with GOP  presidential wannabes that they cannot meet the Virginia standard?  What a bunch of whiners!)  You won’t hear Tim whining about petitions!

Kaine’s visits are different from most other pols. There is a presence, confidence balanced by humility, knowledge, enthusiasm, optimism and earnestness unparalleled by other state-wide candidates. Each and every person is treated with unparallelled respect. He not only answers questions but shows his vast expertise in both Virginia and national issues. I mentioned some time ago,during the RaisingKaine days, that his willingness and ability to listen, really hear and discuss issues had no equal, much less superior. These skills will serve him well throughout his race to November, 2012.

As just one example… (please follow after the fold):

A gentleman asked the former governor about the fact that Virginia Indian tribes are not recognized by the Federal government. Tim not only had reflections to share, reflections illustrating he had given the subject much prior thought, but replied extensively, his knowledge and compassion about the many related issues clearly demonstrated.

Most of all, I was struck by something I think best is described Dec 6th at Forbes, but actually written about Bill Clinton. You can read the article at Forbes. Tim’s ability is right up there with Clinton.

Despite the troubling times we live in, Kaine is optimistic about our ability to address the issues we must. He offers up Virginia (most notably under his leadership) for demonstrating how to carefully cut when necessary, but to do so prioritizing those things which are most critical to the needs of Virginians. He knows how to balance a budget with compassion.  He’s experienced both with a General Assembly split and one working against him.

Four years in a row Tim led the Commonwealth to the top ranking as a place for business. His work as  the cheerleader-in-chief also brought a number of national companies to the state. Virginia has vast talent pool, which is both home-grown and imported from other states because Virginia has historically been a good state in which to run a business and to work.

Regarding the economy, Kaine pointed out that history has shown you cannot just tax-cut the Commonwealth or the nation out of their  problems. A balanced approach which expects the wealthy to pay their fair share is essential too.

I was concerned about the endorsement of the Gang of Six, which appeared to ignore the fact that Social Security has not contributed to the deficit.  Yet, the Gang’s proposal slices and dices Social Security in several ways (people would work longer, lose under the revised COLA plan, receive less, while the Gang would fundamentally turn Social Security into a Welfare program.  This is despite the fact that it is NOT welfare.  We all put money into the system from the beginning of our working days. Wall Street has shown we cannot depend on it to keep our future safe. Yet the Gang’s proposal unfairly makes budget and tax reform on the backs of seniors. Most Americans currently need or will need their Social Security benefits.

That, however, was my only disagreement with Tim Kaine’s remarks last evening. Today I spoke with former MCDC chair and community  leader Lindsay West. Her statement pretty much summed it up regarding Kaine, “We Virginians are lucky, she said. We are lucky in several respects.  Lindsay has been a phenomenal Democrat and a wonderful person.  Our town is lucky to have her.  We likewise have a wonderful current MCDC chair.  I don’t feel lucky with Morgan Griffith, Ken Cuccinelli and Bob McDonnell  supposedly “representing” me (we all know they do not). But Kaine will we a formidable candidate for the US Senate. In that we are lucky indeed.

Note: This diary has been modified from the original by the addition of a couple of sentences.