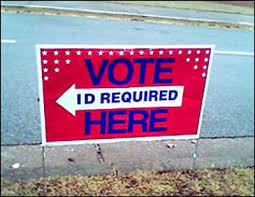 A vigorous, healthy democracy with active voters is our best insurance against the special interest money of polluters who actively lobby to weaken our clean air and clean water standards. For that reason the Sierra Club considers voters’ rights as environmental rights, and this legislative session we will oppose bills that attempt to restrict citizens’ access to the ballot.

Requiring photo identification to vote is an effort by Republicans to suppress the vote in Virginia in advance of the November 2012 election.  SB 1 (by Senator Steve Martin) and HB 9 (by Del. Mark Cole) would require photo ids rather than other forms of identification like a voter registration card, a social security card or even a birth certificate. Ostensibly, this is to guard against voter fraud even though there is no evidence of voter fraud linked to false IDs.

On the other hand, as many as 11% of American adults do not have a photo ID, many of them elderly. When you stop driving, your license expires and many former drivers have no need to secure a new photo ID. These citizens and registered voters will now be denied the right vote the next time they go to the polls.

For all Americans who believe in democracy this legislation is a affront to our basic right to vote, and you should let your state Senator and Delegate know you disapprove.