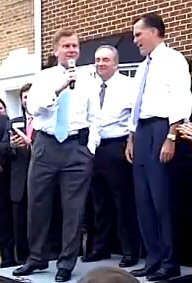 In the history of American politics, no Southern Republican on the Eastern side of the Big Muddy has ever been nominated for national office. The VP power lists are already being circulated on the GOP side with the assumption that Mitt Romney will be the party’s presidential pick. The latest one lists Virginian McDonnell as #2 on Dick Clark’s hit parade, behind Florida Senator Marco Rubio. The rookie from the Sunshine State has said several times the second spot is of no interest to him.

Assuming this is true, then it means Governor McDonnell is already a history maker of sorts — the first Southerner to be the de facto Republican running mate. McD’s emergence for the VP slot-in-waiting is no surprise to readers of this blog, as we were discussing it a good year before the experts proved why they are considered experts at conventional wisdom.

So we write today to point out that the conventional wisdom is once again behind the curve, since McDonnell’s fate is less about his being a good fit for Romney – as we said way back, the Virginian is a terrific match for the Mittster – and more about the political party the former Bay State governor will inherit should he indeed be the GOP nominee.

Given the fissures in the party, Romney will need a unifying ticket to present at the GOP Convention in Tampa. The harder his slog to a majority of delegates, the more he will need to compromise. History has shown a candidate can basically cave in on most platform planks and other such stuff, which always seems important to historians a hundred years after the fact but not to voters at the time.

But ours being a video, visual culture, the GOP Presidential candidate has to have three Convention imperatives: it can’t be seen as a food fight; it can’t feature speakers who alienate key groups of Americans; and the delegates have to been as warmly embracing the ticket.

John McCain, even though he had a rather easy cruise to the nomination after New Hampshire, was forced to choose Sarah Palin in order to keep the Convention happy. It didn’t turn out too well now did it?

Unknown choices are risky in today’s 24/7 political world, which is based on media frenzies, none bigger than the one surrounding a new kid on the vice-presidential block.

Which means: If Romney wins the GOP nomination quickly enough, and does a public dog-and-pony show parading potential running mates before the news media to see who they fail to devour, then Governor McDonnell may make history.

McDonnell is solid; it is doubtful anyone has better hair, or a more photogenic female family, the key demographic in 2012.

But if Romney has to go through months of trench warfare, then he will reach the Convention as a wounded nominee, having had little time or inclination to make a fateful choice on VP until at the last possible moment for fear of angering some group.

McDonnell is acceptable to most but not the first choice of the anti-Romney crowd. If GOP peace requires giving opponents the second spot, then Romney has no other choice.

But right now, this is clear: Two Virginians, Newt and Bob, born in PA, are making big waves in the GOP for 2012.

This is a first for the modern Republican Party. The days of California, led by Nixon and Reagan, are gone for the GOP, and the demise of Rick Perry probably means the end of the Texas era led by the Bushes.

Either in 2012, or finally in 2016, a Southern Republican from East of the Mississippi will be on the GOP national ticket.

A Romney/McDonnell isn’t going to beat Obama/Biden. But assuming the duo run a credible losing race, then it will complicate matters for Virginia Democrats in 2012, 2013 and even for Mark Warner in 2014.

A McDonnell for running mate bet when we first discussed it had 1,000-1 odds, so it was a good wager. But was the “chalk” – as they say at the race track – about the favorite? That’s a horse of another color so to speak.

The best long shot right now: Rick Santorum, on paper the least likely choice for Romney or Gingrich. He is like Joe Biden: all the bad stuff is already out, he doesn’t excite but he is a known quantity who can help unite the party. But at some point, Santorum’s attacks on the eventual winner assuming it isn’t him will have gone too far. Right now, he hasn’t crossed the line. So if he continue to have a good image around the country, the Pennsylvanian has to making Governor McDonnell look over his shoulder.