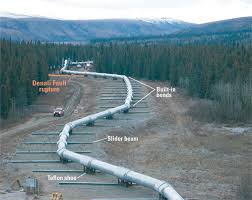 What if I told you that you might only know half the story about the tar sands pipeline?  Suppose there is a second tar sands pipeline From Northern Canada to Wisconsin, indeed from the very same town the proposed Keystone XL pipeline  will originate, which has already been in service since October 2010? Didn’t know this? Don’t feel bad. Most folks only know the half of the tar sands story, maybe less. I was one such person. And then I read a very revealing article today.

That President Obama has been ridiculously, unfairly and obnoxiously slammed for his delay (not rejection) in approving the Keystone XL Pipeline is an understatement. As most of you know, the Congress pushed an absurd approval deadline upon the President, who wanted to study an alternate route which would bypass the massive aquifer (which provides drinking water for millions of people in the Midwest) in its current path. God forbid the President should care about, you know, drinking water.

And so the Tea-Party-backed Rethuglicans have ranted and railed ever since about Obama’s purported obstruction of a pipeline he is very likely to approve anyway, after routing modifications.  And yes, the reason for the howling and screaming is that at least some of said howlers have been paid to do so by none other than the usual suspects who have a vested interest in said pipeline.  Yep, Charlie and Dave were at it again pumping money into the coffers of the some of the howlers. “Me too,” coveted the rest of the Rethugs, no doubt wanting a piece of the action (err campaign finance dollars).  And the clones and hacks have been all over the media spreading disinformation about both the number of jobs AND whom the resulting Keystone oil will go to (not us!). But, again, all of that is the half of it.

It turns out that the president approved a shorter pipeline (1,000 miles) to Wisconsin.  That pipeline provides 800,000 (more than Keystone) barrels of oil per day. And it is already in service-since October 2010!!!! “Say what,” you ask. Check out this National Journal story about the Pipeline, a project of Enbrdge Oil nicknamed teh Alberta Clipper.

You won’t hear about that one in the so-called Main Stream Media (MSM).  The Enbridge pipeline was approved by the Dept of State and moved to construction with nary a comment or footnote.

That otherwise informed Americans did not know about this adds up to a PR #FAIL on the part of the administration. Why would they not point this out amid all the hysteria by the wing nuts of the other party? Or perhaps the administration didn’t want to stir things up with the base on that one. I don’t know. But, for the average American, who would likely support the “second” (but actually the first built) pipeline, Obama would probably score some points.

So, I cannot figure out why the administration doesn’t use ALL the evidence it has that it has not obstructed ANY pipeline and in fact has already permitted one in service (that almost no one knows about).  It hasn’t obstructed any oil for the US related to the Keystone Pipeline, because Keystone XL will neither help our domestic energy supply, create sufficient permanent jobs to justify such “job creations” claims, or protect vital drinking water. It is doubtful that a re-routing will do all that much better.

But the point is, Congress is gridlocked for nothing.  And it is time to call out the promoters of such destructive and ironic obstruction, the Congressional Conservatives of the Grand Oil Party, which is, it turns out, howling at the moon (again).

Richmond Judge Who Issued Injunction Against Removing Any More Confederate Monuments Once Threatened to Emigrate Due to Busing, “Parasites” Voting and Becoming “Dominant Force...