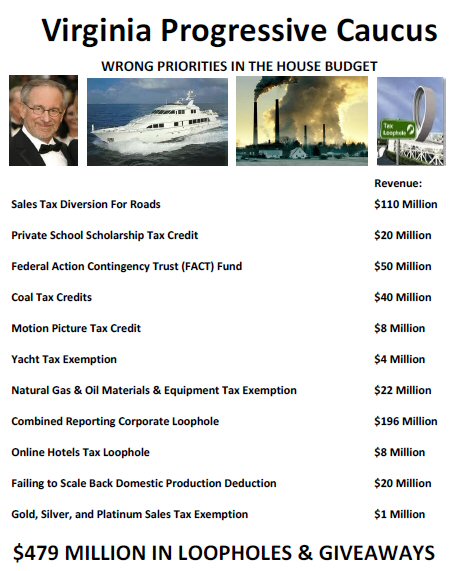 The full statement from the Virginia Progressive Caucus is below the “fold.” The gist of it is that the House GOP budget “diverts general funds toward transportation, and also places its focus on corporate tax loopholes, tax exemptions for items like yachts and gold, subsidies for a handful of wealthy special interests such as Amazon, film studios and producers of gas and coal. For the biennium, these represent approximately $479 million in funds that could be used for Virginia’s pressing needs.”

I’d also add that the Virginia estate tax, which was repealed in 2006, costs us $120 million per year out of the general fund, in order to help around 871 super-rich Virginians. To date, it’s been about 5 years since the Virginia estate tax was eliminated, which means we’ve lost about $600 million so far. How much could we do with $600 million? Well, you can see how far $479 million would go, so simply add another $121 million to that and decide whether you want more teachers, firefighters, police officers, students in pre-k, etc.

Richmond – Today, members of the Virginia Progressive Caucus spoke at a press conference regarding the state budget.

Delegate Patrick Hope (D-Arlington), Progressive Caucus Co-Chairman, said, “The Republican-passed budget does not reflect the priorities of average Virginians. Hundreds of millions in corporate giveaways and loopholes are coming at the expense of hiring more teachers and increased class size. Their priorities put our children’s education and our economy at risk, leaving us less prepared to compete in a 21st century global economy.”

The House Republican budget diverts general funds toward transportation, and also places its focus on corporate tax loopholes, tax exemptions for items like yachts and gold, subsidies for a handful of wealthy special interests such as Amazon, film studios and producers of gas and coal. For the biennium, these represent approximately $479 million in funds that could be used for Virginia’s pressing needs.

$479 million is a figure that reflects missed opportunities in funding. During the biennium, $479 million could be used to fund any of these priorities:

“Rather than spend millions of dollars on private school tax credits, we should be repairing the damage done to public schools since 2009. We are educating more students with fewer teachers and less money. It’s time to invest in education rather than shortchange our children,” said Senator Adam P. Ebbin (D-Alexandria), Progressive Caucus Co-Chair.

·         The budget eliminates long-term healthcare coverage for many seniors.

Delegate Hope said, “Seniors are one of the hardest hit groups in this budget, eliminating long term care funding for nearly 4,500 frail and elderly Virginians receiving nursing home care. Kicking our parents and grandparents to the streets is another example of the wrong priorities for Virginia.”

·         The budget fails to address our transportation crisis.

“Just like last year, the Governor’s latest transportation proposal is just another gimmick that represents a drop in a bucket,” said Delegate Scott A. Surovell (D-Fairfax County). “Last year, we accelerated $3 billion of borrowing to cover a $150 billion project shortage. This year the Governor is proposing $50 million per year to cover a multi-billion dollar annual shortfall, and stealing it from starved schools, substandard healthcare, hurting colleges, and a failing safety net to boot.”