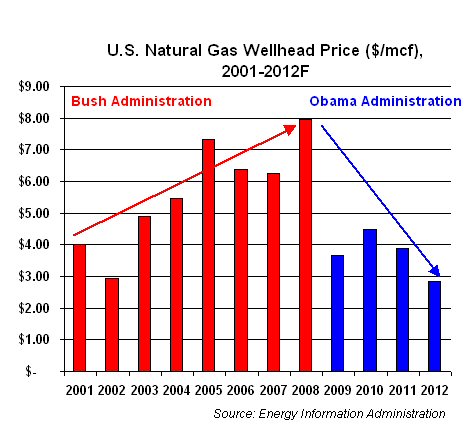 To put it mildly, the “debate” over energy policy, “gas prices,” etc. in this country is not exactly at the highest levels. To the stark contrary, it’s mostly demagoguery, misinformation, ignorance, fossil fuel industry talking points (aka, “lies”), and utter lack of understanding of Econ 101. For instance, on “gas” (aka, “gasoline,” or as we called it at the Energy Information Administration, “motor gasoline”), we have the Newt Gingriches of the world “promising” to get us back to a specific price ($2.50 per gallon, apparently). How would he do that? Pretty much by “drill baby drill”ing here in the United States. Of course, noone who knows anything about oil markets believes that has even a remote chance of working, but so be it, this is the Republican presidential primary we’re talking about, basically a fact-free (or at least fact-optional) zone.

Then, of course, the “rise” in “gas prices” is all “Obama’s fault,” even though pretty much none of that is even close to being on point. For starters, “gas prices” have only “risen” in relation to their Great Recession low point reached in late 2008/early 2009. As Econ 101 tells us – unless we were asleep or flunked the class – when the economy’s collapsing, demand for goods and services like…uh, gasoline, will plummet as well. And, ceteris parabis (“all else being equal,” as economists like to say), that will mean plummeting prices as well. Which is exactly what happened. Then, when the economy starts recovering – as it’s going now – demand and prices will bounce back as well. Exactly as is happening now. Add in concerns over Iran (exacerbated by irresponsible, loose talk of warwarwar by Republican presidential candidates), some degree of “speculation” by commodities traders, and a slim margin of “spare production capacity” worldwide, and prices soar. Which, again, is exactly what’s happening now.

Meanwhile, in the alternative universe known as the “Republican Party,” “gas prices” apparently are a function of one thing and one thing only: U.S. oil production. Despite the fact that the oil prices are set on the world market, and that any increments in U.S. oil production we could possibly see in the next few years would make up only a tiny percentage of that world oil market. In other words, what they’re saying is utter nonsense. As is the part about President Obama having much, if anything, to do with any of this. But don’t worry, that won’t stop them; remember, they live in a fact-and-reality-free zone — must be comforting.

Oh wait, I forgot, for Republicans, if President Obama announced tomorrow that he had personally cured cancer and the common cold, the Republican’t response would be something like: 1) Socialism!!!; 2) why didn’t he cure them EARLIER?!?; 3) why didn’t he cure all the OTHER diseases too?!?; 4) this is a dark conspiracy, part of the government takeover of health care, probably death panels, almost certainly need to check his birth certificate again because we know he’s a secret Kenyan anti-colonialist blah blah blah.

In sum, Republicans are full of it, as usual, when it comes to “gas prices,” oil markets, Econ 101, and pretty much everything else they blabber about (contraception is bad, sex is evil, women are sluts, education is elitist, there’s a “war on religion” raging, other assorted Bircher lunacy). The only question I have is simple: why does anyone listen to these loons? How about we just tune ’em out, mock their tinfoil hats and ignorance, and go along with our lives?

P.S. Also worth noting: the U.S. consumes more natural gas than it does motor gasoline (aka, “gas”), so the plummeting prices of natural gas arguably have a comparable impact on the U.S. economy as higher “gas prices” do. Yet you’ll never hear a word of this from politicians or the corporate media. Why is that?