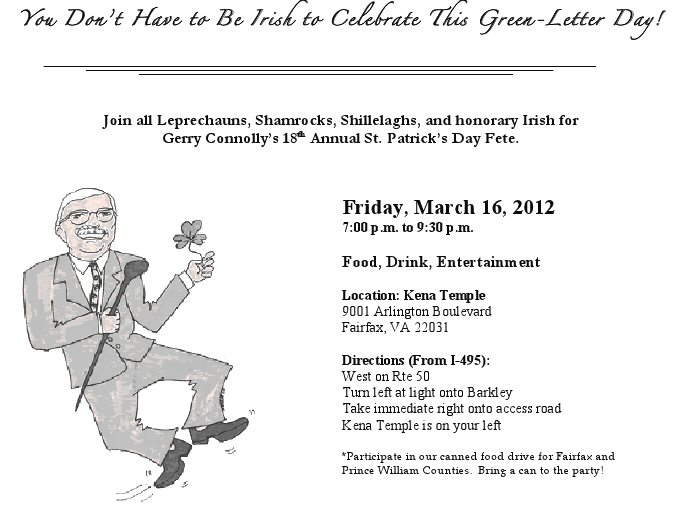 Press release on the “flip”

FAIRFAX – Congressman Gerry Connolly will hold his 18th Annual St. Patrick’s Day Fete on Friday, March 16 in the ballroom at the Kena Shriners’ Temple. The event begins at 7 pm.

Connolly’s event, which is the largest annual Democratic gathering in Northern Virginia, attracts Democrats and elected officials from across Northern Virginia and beyond.  Connolly began hosting the event when he was first elected to the Fairfax County Board of Supervisors  in 1995 and has continued the tradition ever since, through nine elections.

The annual St. Patrick’s Day event started as a small gathering in Connolly’s Fairfax home.  Soon tents had to be erected behind the Connolly home to accommodate larger crowds, but it soon outgrew that venue too. It has been held at the Kena function hall in the heart of Connolly’s district ever since.

Each year, over a thousand of Connolly’s guests enjoy traditional Irish fare of corned beef and cabbage along with the appropriate victuals, Irish music, and good company.  Elected officials, campaign volunteers, neighbors, friends, political activists, and supporters from across Northern Virginia are regulars at the event.

What % of Virginians Plan to Restrict Their Thanksgiving Celebration to Just Their Own Immediate Household?

Wednesday News: “Biden team inherits Trump’s ocean of troubles”; “Thanksgiving could be the ‘mother of all super spreader events'”; 3,000 COVID-19 Deaths/Day by Christmas?;...