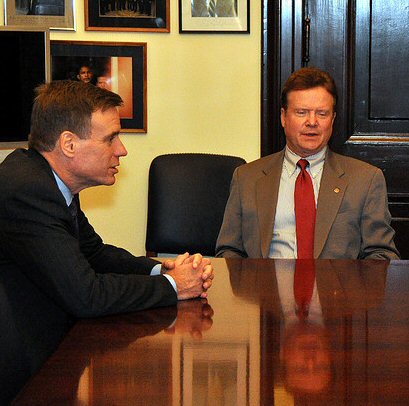 There have been a series of votes on amendments to the massive highway bill. As you can see, several of them (actually, most) have basically nothing to do with the transportation bill’s ostensible purpose – building and maintaining roads, bridges, rail, transit, etc. Here are the amendments related to energy and the environment, with votes by Senators Webb and Warner and my comments in italics.

This bill was an attempt to ram through the expensive, environmentally-hazardous, job-killing, gasoline-price-increasing Keystone XL dirty tar sands export pipeline. Clearly, the correct vote here was NAY. Thanks to Senator Warner for getting this one right, boo/hiss to Senator Webb for getting it totally wrong.

Wyden Amendment (“To ensure the expeditious processing of Keystone XL permit applications consistent with current law, prohibit the export of crude oil produced in Canada and transported by the Keystone XL pipeline and related facilities unless the prohibition is waived by the President, and require the use of United States iron, steel, and manufactured goods in the construction of the Keystone XL pipeline and related facilities with certain exceptions.”) Warner NAY Webb NAY (Amendment failed to pass the Senate)

Senator Wyden’s amendment got at some of the absurdities of Keystone supporters’ “arguments.” The correct vote was “YEA,” as it would have shown this entire thing to be the absurd boondoggle that it truly is. A big Bronx cheer for both Senators Warner and Webb, as they both voted wrong on this one.

This horrendous amendment would have – as NRDC explains – “abolish[ed] clean air standards for the 2nd largest source of industrial toxic air pollution in America,” standards that “will save up to 8,100 lives annually that are lost to air pollution-induced heart attacks, strokes and other ailments.” The correct vote here was NAY. I’m happy to report that both U.S. Senators from Virginia got this one right. Thank you.

This amendment, by “Diaper Dave” Vitter,” would have ramped up offshore drilling, including “[the extension of] drilling off the Virginia, California and Florida coasts as well as Bristol Bay and Cook Outlet in Alaska.” The correct vote here was most definitely a NAY. Thanks to Senator Warner for getting it right. As for Senator Webb, perhaps at this point I should follow the saying, “if you don’t have something nice to say, don’t say anything.”