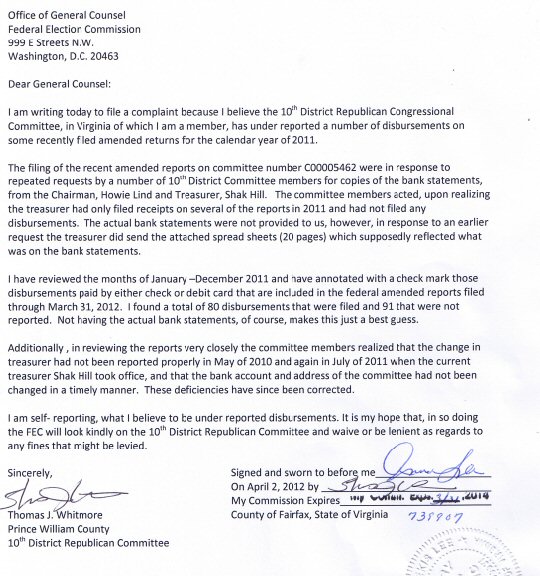 For background on this story, see the Too Conservative blog, where “Loudoun Insider” writes:

I’ve been a big fan of Frank Wolf since he became my Congressman. A huge part of that has been the fact that he has been as scandal proof as any Congressman has ever been. I always trusted the guy.

But now we have some really skeevy politics happening in the 10th Republican Congressional District Committee, which is very closely tied to Wolf. Howie Lind is now the subject of an FEC complain filed by Tom Whitmore, a long time party activist and straight shooter who is also running to be the next PWC republican Committee Chairman…

…Something smells very rotten in this whole mess.  What a shame that this has to happen at the end of Wolf’s distinguished Congressional career.

Yeah, let’s just hope that it really IS “the end of Wolf’s…Congressional career.” In the meantime, check out the FEC complaint by Mr. Whitmore (click to “embiggen”) above, as well as a couple of emails – one from Whitmore and one from Howie Lind (note: this email’s already been posted on right-wing/anti-“illegal immigrant” blog BVBL) – on the “flip.”  Unreported expenses include drinks, food, tolls, rent, and (my favorite) $200 in “Bartending services for Spike” (presumably, Michael “Spike” Williams, who was running for Fairfax County Board Chair last summer). LOL

P.S. What, if anything, was Rep. Frank Wolf’s involvement in and/or knowledge of this situation? In short, what did he know, when did he know it, and what did he do – or fail to do – about it?

By bringing this to the FEC’s attention the expenditures will be itemized and examined, anything improper will have to be refunded to the committee.  We have kept a lid on this by not bringing in others and making sure it did not hit the blogs.  We should continue this policy.

Howie did finally send copies of the Federal bank statements for 2011 on Friday evening April 6th, only after he had word of the complaint.  They confirmed what was on the spreadsheet.  What Howie calls an accidental glitch on the FEC report, I believe is more of a voluntary switch.

Also, in speaking with the FEC, this was the best way to make sure the false reports of the past 6- 8 months and the subsequent deceptive amendments were dealt with immediately.  Otherwise the issue could have dragged out and then blown up and gone viral a month or so out from the election, thereby impacting the elections.  Once the reports are made falsely, we are stuck with them.  Add to that the sheer quantity of amended reports, being filed incorrectly by not showing many of the disbursements in the itemization, along with many of these being of an embarrassing nature, we were in a stew. The FEC stand is that we would have been better off had NO reports been filed.  This needed to be resolved now and folks needed to be aware of the expenditures.

Regardless of how Howie tries to spin this, we did the right thing. The complaint is not what is embarrassing, it is the several months of not reporting expenditures and then the filing of 20, yes count them 20 amended reports that hid more expenditures than were itemized.  It will take a minimum of 10 more amended reports if we are to itemize the expenditures.

I am attaching the FEC complaint, which clearly states the motive, which was to self report that we may have under reported our disbursements, and thereby minimize any penalties or fines, by self reporting the issue.  Indeed, most months since Shak Hill became treasurer we had reported $0 disbursements even though we had campaign offices, an employee and many expenses.  There were approximately $40,000 of under reported disbursements on the federal account alone.  Couple this with the fact that many of the unitemized or unreported disbursements would not normally be acceptable to the FEC.  This is serious business, make no mistake about it.

I would also note that Howie and Shak have still specifically ignored our requests for the McLean office lease, the Feb 7th meeting minutes and the treasurers reports, even to date.  We have not had a treasurers report for at least nine months.  Simply reporting the balance in the Federal and State accounts is not a treasurers report by any standard.

His claim that reporting of all disbursements was made timely, is false.  What part of $0 of disbursements for 6 consecutive months does he not understand?  BTW the state reports are in the same condition, $0 disbursements for the 3rd and 4th Qtr.  If we had not challenged this, the rest of the disbursements would not have been reported openly, once you see them you will understand why they were holding back.  The whole purpose of reporting is to see to whom, for what and how much is being spent.

We asked that the FEC be lenient as a result of us self reporting and there is absolutely no risk to the members of the committee as Howie alludes. The chairman and the treasurer are the ones responsible to file correctly.  Whatever fines or penalties might be assessed would have been for the not reporting of disbursements for those six months and not making other reports on a timely basis.  There is nothing in the complaint that would engender more penalties, conversely if anything, it will help to reduce any penalties that would have otherwise been assessed. We did have a previous FEC fine paid in March that is one of the expenses not showing up.

Along the way, most folks who would have been affected by this filing had been appraised of the situation.

I attached the federal reports, July onward are the most interesting.  Later today I will share the expenses with everyone on the most recent distribution list including the State accounts and make a detailed response to Howies letter.

Had the amended reports included the appropriate detail, had Howie or Shak sent both leases, treasurers reports and the bank statements then the complaint might not have been necessary.  One of Howies key issues when running for chairman was transparency, he should expect to be held to no less a standard.

RE: Recent FEC Filing Against the 10th District Committee

As you may already know, on April 2, Tom Whitmore – with Anna Lee’s signature as witness – submitted an official complaint with the Federal Election Commission against the 10th Congressional District Republican Committee for alleged election code violations relating to incomplete disclosures.

This complaint has one clear and simple purpose:  to intimidate and discredit the entire 10th District Committee.  However, I can assure you that this filing is frivolous and without merit, and will not stand.

Here are the facts:

1. The 10th District Committee leadership and financial team have been open and responsive over recent months in dealing with a series of requests from members for financial records.

Over the last several months, I have received threatening emails from the above individuals and a few others requesting two sets of financial records:  the Committee’s bank records and the rental agreement for our Victory Office in Leesburg.  I sent the rental agreement in an April 1 email to the entire Committee.  Separately, the Committee’s treasurer, Shak Hill, sent spreadsheets that he created from the bank records in a more readable format than the monthly postings we receive.  There was and is nothing to hide in these bank records.  All of the information from them is contained in the spreadsheets.

In addition to these communications, I have been keeping the entire Committee apprised of the contents of these records, including an oral presentation at the Committee meeting on February 7.

In my 10th District update email on March 7, I also stated that we were in the process of amending FEC reports for 2011 as a result of the untimely death last summer of our prior Treasurer, Charles Proctor, and the replacement in January of the individual responsible for our FEC filings.  On April 1, I informed all Committee members by email that the amended reports had been filed.

2. All required FEC reports, including financial disbursements, have been posted on the FEC site in a timely manner, and 10th District Committee members have also been apprised of that fact.

On March 30, the person responsible for our filings posted amended federal reports, including the full range of disbursements, on the FEC online site using new FEC software.  These reports were complete and correctly filled out.  However, because of his unfamiliarity with the software, the filer did not activate a specific setting to display all disbursements.

As mentioned above, on April 1, I informed all members of the 10th District Committee that the reports had been posted, in keeping with my policy and practice keeping you apprised of all financial and other activities.  Since the oversight in activating the setting was brought to our attention, the setting is being corrected and the disbursements will be displayed properly.  We will respond expeditiously to the FEC complaint, and we expect this matter to be closed out without any finding of violation or penalty to the Committee.

3. Mr. Whitmore and Ms. Lee chose to file the complaint without checking with the leadership team as to its substance or merit, and in direct contradiction to the best interests of the 10th District Committee, its members, and the Republican Party.

Despite my assurances in my April 1 correspondence that all financial information had been filed, Mr. Whitmore and Ms. Lee chose to file a complaint to the FEC — the very next day — claiming that not all of our disbursements had been included in our reports –  literally making a federal case out of a software glitch.  They filed this complaint without contacting me for an explanation or, in the best interests of the Committee, working with us to ensure that all appropriate information was included.

Mr. Whitmore and Ms. Lee took this action knowing that the very fact of an FEC complaint will serve to discredit the Committee and its leadership in the eyes of Party members and the public, that past internecine warfare of this nature has badly hurt our electoral prospects, and that actions of this nature could expose the entire Committee membership to legal liability.

Mr. Whitmore’s and Ms. Lee’s behavior hardly represents the kind of constructive, cooperative, unified approach that has contributed to our recent string of electoral success and that one would expect from individuals holding themselves out as candidates for Party leadership.

I want to reassure you, again, that this filing is frivolous and without merit, and that I will personally take the lead in responding and resolving the matter with the FEC.  And equally important, I have no intention of letting this trivial and small-minded action distract us from the truly critical business before the Committee:

1.  Handing a unified Party over to my successor.

2.  Doing our part to evict the current occupant from 1600 Pennsylvania Avenue.

3.  Reclaiming Virginia’s U.S. Senate seat for the Republican Party; and

3.  Ensuring Frank Wolf yet another overwhelming re-election victory in the 10th Congressional District.

A final point, in order to properly respond to the FEC, we will need to engage an attorney with experience dealing with the FEC. I have contacted one such attorney, and I ask that you authorize the Committee to expend up to $600 to cover these expenses.

Please contact me directly at xxx-xxx-xxxx for any questions or concerns.

Thank you for your continued support.