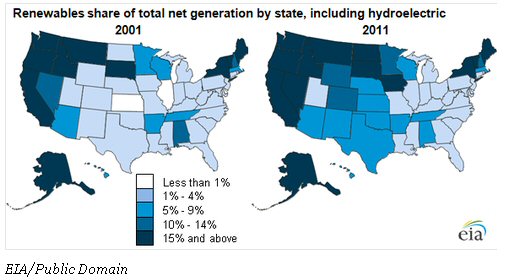 According to EIA, “Non-hydroelectric renewable generation has increased in many states over the past decade.” Those states include “blue” states (e.g., the west coast, the northeast) and “red” states (e.g., Texas, Nebraska, Kansas, Oklahoma, Idaho). Then there’s a state you might be familiar with, where its governor likes to talk about turning it into the “energy capital of the east coast.” Yes, that would be Virginia, and no, we are not moving in the least bit towards becoming the “energy capital of the east coast.”

Why not? Bad/stupid policies, basically, like our absurd failure to enact a strong, mandatory Renewable Portfolio Standard (RPS), as many other states have done. Also, how about net metering? Strong tax incentives for homeowners and businesses to install renewable energy, energy efficiency, etc? At this point, we’re lagging way, wayyyy behind many other states, let alone many other countries.

In sum, we’re getting nowhere fast in our goal of becoming the energy capital of anything, let alone in transitioning to a 21st century clean energy economy. It’s not because it can’t be done, as many, many other states – again, both “red” and “blue” politically – have been showing.

Another result of Virginia’s bad/stupid policies towards encouraging a clean energy economy: we’re missing out on the rapid jobs growth in solar power and most other renewable energy sources. As Andrea Luecke of the Solar Foundation explains, “the states that are doing well in terms of solar job creation are the states that have those integral policies like [Renewable Portfolio Standards — RPS], net metering…local rebate programs…third-party purchase agreements.” Unfortunately, as Luecke adds, “It seems like some states are taking a pass on one of the fastest growing industries in America…they’re not making the policy investments to create an environment in which this industry can take root within their state’s borders.”

One of those states “taking a pass” is, sadly, our own state of Virginia. Clearly, that needs to change, or we’re going to miss out on one of the most important industries of the next few decades. The question is, will we ever come to our senses on this, or will we continue to behave in an utterly irrational, counterproductive fashion? As long as Republicans, and also Democrats in the pocket of the fossil fuel industry, stay in charge, I’m not optimistic. How about you?

Virginia - and every other "blue" state - needs to do this, ASAP https://bluevirginia.us/2020/09/saturday-news-climate-crisis-the-u-s-is-on-the-path-to-destruction-rip-rbg-can-mitch-mcconnell-be-stopped-trump-laughably-predicts-victory-in-virginia-slams-crazy-northam-as-virginia#comment-5076932697