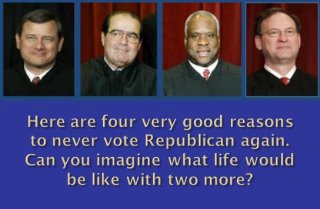 The current Supreme Court, dominated by right wingnuts like Antonin Scalia, Clarence Thomas, and Samuel Alito, is rapidly turning into one of the worst in U.S. history. Here’s the latest case in point.

By a 5-4 vote, the court ruled against a New Jersey man who complained that strip searches in two county jails violated his civil rights.

Keep in mind that the individual in this case, Albert Florence, was subjected to a strip search even though: a) it was simply “a warrant for an unpaid fine;” b) “the fine actually had been paid;” and c) “failure to pay a fine is not a crime in New Jersey.” Despite all this, the so-called “conservatives” – actually far-right-wing judicial activists – on the Supreme Court said it’s perfectly fine for the state to run roughshod over individual civil liberties in this country. So much for being “conservative” in any way, shape, or form.

P.S. What part of the Fourth Amendment (“The right of the people to be secure in their persons, houses, papers, and effects, against unreasonable searches and seizures, shall not be violated, and no Warrants shall issue, but upon probable cause, supported by Oath or affirmation, and particularly describing the place to be searched, and the persons or things to be seized.”) do these right-wingnut morons masquerading as Supreme Court Justices not understand?!?