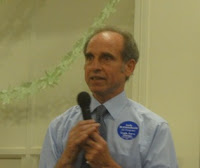 Last night in Harrisonburg, there was a Candidates’ Forum for the major party candidates for U.S. Congress from Virginia’s 6th District. As the Democratic nominee, I participated. So also did Karen Kwiatkowski, the Republican challenger to the Republican incumbent, Bob Goodlatte, who will settle their contest a week from today (June 12th) in the Republican primary. The incumbent was invited, but did not show up, nor indeed even respond to the invitation.

There’s a review of the event — a review I feel good about, for reasons that will be obvious if you click on this link and read the entire thing by Belle Rose on Coarse Cracked Corn, a political blog based in the Shenandoah Valley. In part, it reads as follows:

Last night’s “debate” between GOP candidate Karen Kwiatkowski and the Democratic nominee, Andy Schmookler gave the crowded fellowship hall at Community Mennonite Church a glimpse of how political discourse in a democracy could be, and should be, conducted…

Karen Kwiatkowski and Andy Schmookler were both winners last night. But, the biggest winner was a notion that democracy should engage citizens in an honest and open discussion of compelling issues. That sharp political discussion can be engaging, cordial, and without vitriolic personal attacks.

In between those two quotes, Ms. Rose offers cogent observations about what each of us presented in last night’s Forum.  Again, here’s a link to the complete review; I encourage everyone to read it.