I contacted UVA Media Relations for more information on the use of PR firm Hill & Knowlton by UVA Rector Helen Dragas, and they referred me here. Also note that Hill & Knowlton is one of the slimiest PR firms out there, having been involved in a large number of controversies over the years (e.g., regimes around the world accused of serious human rights violations; fracking and the oil/gas industry; the firm designed “the tobacco industry’s strategy for counteracting scientific evidence which linked cigarette smoking to lung cancer”). THIS firm is “a contracted vendor registered with the state?” Don’t we have ANY standards?!? Apparently not.

Clarification regarding the use of a PR firm

The University of Virginia (Real Estate) Foundation did NOT hire a firm on behalf of the Rector.

The firm that has been hired – Hill+Knowlton – already is a contracted vendor registered with the state.

Many institutions bring on additional public relations professionals during particularly challenging times. The firm was hired on behalf of the Rector and the Board of Visitors to assist them in handling the matters over the past weeks.

While invoices will be submitted through the Board of Visitors office, no state funds will be used to pay for Hill+Knowlton’s services. The funds will come from other sources of University funds, including the endowment.

At this time, NO invoices have been submitted and information about the Hill+Knowlton’s state contract is available at: https://www.gsaadvantage.gov/r…

P.S Also note that I contacted Hill & Knowlton for comment on a number of questions (see the “flip” for those); their spokesperson responded with a non-answer, that “As general corporate policy, we do not comment on our clients or prospects, or the details of our relationships with either.” Not that they have anything to hide, of course. Heh. 😉

1. Who decided to hire Hill & Knowlton to represent UVA Rector Helen Dragas and/or the Board of Visitors?

2. How much exactly is Hill & Knowlton being paid, and what exactly are the deliverables?

4. Is there a contract, statement of work, or billing documents between Hill & Knowlton and UVA, the Board of Visitors, Helen Dragas, or any other UVA employee? If so, what do I nee do to get a copy of it/them?

5. Do you have any comment regarding the fact that Hill & Knowlton has previously represented such unsavory clients as Big Tobacco (Hill & Knowlton designed the tobacco industry’s strategy for counteracting scientific evidence which linked cigarette smoking to lung cancer), and “reportedly used scaremongering tactics to kill legislation before the European Parliament in 2005 that would have banned fluorinated gases

(“f-gases”), which contribute to global warming.”) 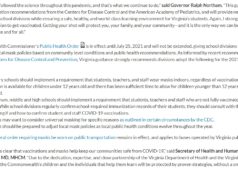