Sometimes with politicians, it’s hard to tell if they’re telling the truth or lying. With Bob McDonnell, it’s much easier: if his lips are moving, you know he’s lying! Occasionally, though, they go “off message” – whoops! – and a glimmer of truth slips out for a second. For instance, this morning on CNN’s State of the Union (see video on the “flip”), Bob McDonnell actually admitted – although it was like pulling teeth to get him to do it – that “sure,” the stimulus DID “help us in the short-run with health care and education and spending…balance the budget.” Oh, and “sure…I think there are national policies that have had some impact.” Well, duh, T-Bob, anyone with half a brain could have told you that. In fact, all you had to do was use “the Google,” and you’d have found the following graph in about 2 seconds (if you had bothered to look). 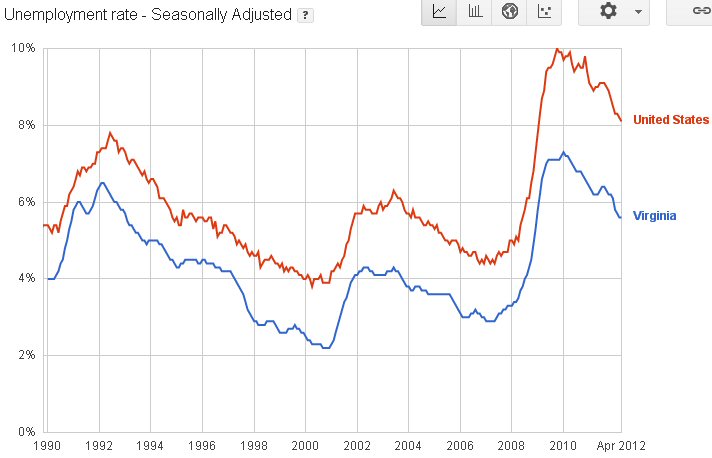 The point is simple: Virginia’s unemployment rate is always lower than the national average, mostly for structural reasons, particularly the large federal – civilian and military – government presence in our state, plus the huge amount of federal largesse Virginia receives, which makes Virginia among the states most dependent on federal largesse for its prosperity. Let me repeat that: Virginia is one of the states in America that benefits the most, on net, from federal largesse. Same thing with most “red states.” Some of those red states, like Texas and North Dakota, also have benefited from $100 per barrel oil prices, and the fact that oil production has boomed under President Obama, but don’t expect Lyin’ T-Bob to mention any of those facts.

The bottom line: Virginia’s lower unemployment rate relative to the national average since Bob McDonnell became governor in January 2010 has had absolutely nothing to do with Bob McDonnell’s policies. To the contrary, it’s in spite of McDonnell’s austerity/all-cuts-no-investments approach, and thanks to heavy federal “stimulus” spending which disproportionately benefited Virginia. Of course, you wouldn’t expect any gratitude from Bob McDonnell for that, since Democrats were 100% responsible for it (with Republicans voting en masse against it), but at least he could admit the factual reality of the situation? Nah, who am I kidding?!?