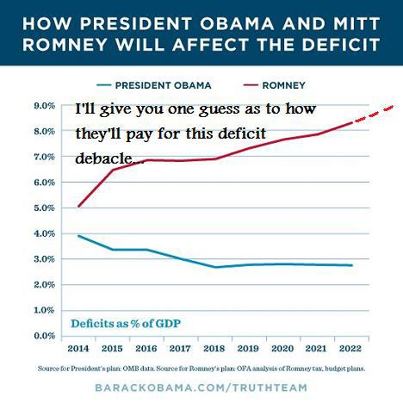 Here are a few Virginia news headlines, political and otherwise, for Tuesday, June 12 — election day (polls are open from 6 am to 7 pm). Make sure you exercise your right, and in my view, your duty as a citizen of the United States, to vote. Finally, check out the graphic, and remember the next time you see one of those 100% false ads about the “job-killing debt” or whatever, that: a) Republicans like Ronald Reagan and George W. Bush are mostly responsible for racking it up; and b) Romney would make the situation a LOT worse if, god forbid, he were elected president. In short, those ads are a actually a strong, albeit unintentional (and also false, as I don’t believe there’s any serious evidence that debt, per se, “kills jobs”), argument NOT to vote for Willard.

*Jeb: Reagan, Bush Sr. ‘would have hard time’ in new GOP (As would Dwight Eisenhower, Gerald Ford, Bob Dole, and all the moderate and progressive Republicans who used to fill the GOP – but not anymore! See Rule and Ruin: The Downfall of Moderation and the Destruction of the Republican Party, From Eisenhower to the Tea Party for more on that subject.)

*The Warners – Mark and John – reminisce about bipartisanship (And there still would be bipartisanship if the Republicans hadn’t driven moderates and progressives out of their party and essentially become the John Birch Society.)

*Independents the apple of Allen’s eye in Va. race (Why would independents vote for a corporate hack and right-wingnut like George Allen?)

*The leadership crisis at U.Va.

*Editorial: UVa board owes an explanation (“The board of visitors hinted that fundraising is one reason for the departure of President Teresa Sullivan.”)

*Washington-area housing prices pick up in May

*Fairfax to base 40% of teacher evaluations on student progress

*Forecast: Showers and storms today; seasonal-to-cool weather into the weekend