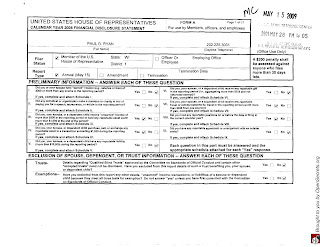 This past Saturday, The Richmonder posted a fascinating story providing evidence of possible insider trading by Willard Romney’s running mate, Rep. Paul Ryan, just prior to the 2008 stock market crash. As The Richmonder explained:

… Ryan attended a closed meeting with congressional leaders, Bush’s Treasury Secretary Henry Paulson, and Federal Reserve Chairman Ben Bernanke on September 18, 2008. The purpose of the meeting was to disclose the coming economic meltdown and beg Congress to pass legislation to help collapsing banks.

Instead of doing anything to help, Ryan left the meeting and on that very same day Paul Ryan sold shares of stock he owned in several troubled banks and reinvested the proceeds in Goldman Sachs, a bank that the meeting had disclosed was not in trouble. This is the guy Republicans want one heartbeat away from the presidency? He seems more than a little shady to me.

On Monday, The Richmonder’s story “went viral,” as they say in social media lingo, with blogs and newspapers all over the world picking it up. But then…(cue ominous music)…the story was (supposedly) “debunked” by Benjy Sarlin of Talking Points Memo (TPM). The supposed “debunking” was based on one key fact, that “the meeting with Bernanke took place in the evening after trading hours, meaning Ryan wouldn’t have had time to execute the move if he wanted to.” In addition, not that we should care what pathological liar Willard’s campaign has to say about anything, but they claimed “Ryan had nothing to do with the trades in the first place.” Whatever.

So, based on this TPM “debunking,” The Richmonder’s story died. Except now it’s apparently un-“debunked,” thanks to great work by Lynn Parramore of AlterNET:

First of all, the Romney campaign’s claim that the transactions were index trades is not consistent with what’s in the original disclosure reports. AlterNet discussed the controversy with money and politics expert Thomas Ferguson, who has written extensively on the bailout. He explained, “Ryan did own some index-based securities, but they stand out in the summaries. They are different from the many trades Ryan was making in individual stocks. It is perfectly obvious that he sold shares in Wachovia, Citigroup and J. P. Morgan on September 18 and he bought shares in Paulson’s old firm, Goldman Sachs, on the same day. If these were index trades, what’s on the form is nonsense.”

While it’s not possible to pinpoint exactly what Ryan knew and when he knew it, the whole episode becomes more disturbing the deeper you look into it.

Check out the entire story at AlterNET for yourself, but the bottom line is that “If you swallow the idea that Ryan just happened to buy Goldman stock that day — a day he just happened to have a meeting with Hank Paulson, the firm’s former CEO, well, then I have some unicorns I’d like to introduce you to.” Me too. And a few bridges. And swampland property. Etc. Oh, and the word “gullible” is not in the dictionary, dontcha know? Heh.

What I find so pathetic here is how quick progressives and Democrats often are to back off on a story, even when there’s a lot of evidence that it very well might be serious, at the slightest “denials” and “debunking” by Republicans, accepted (gullibly?) by a fellow, normally excellent, progressive website. In stark contrast, Republicans keep going and going and going on verifiable lies (e.g., their fallacious, insane claims on welfare, Medicare, Obama’s “birth certificate,” global warming “denial,” etc, etc.), even after voluminous evidence, by non-partisan, unbiased fact checkers (and/or the CBO) has come out obliterating their claims. It’s maddeningly frustrating, although of course it’s also a healthy sign – in stark contrast to the right wing – that progressives actually care about honesty, the truth, empirical evidence, science, etc.

In this case, what JC Wilmore (“The Richmonder”) did wasn’t to prove anything definitively, but to dig out information that looks really suspicious, and basically put it out there for others to look into more deeply. Obviously, a small blog like The Richmonder doesn’t have the resources of a major news organization, to dig in and really investigate this stuff. And, with all due respect to TPM, I strongly doubt they do either. Which is why for Benjy Sarlin to claim the story was “debunked,” based on not much at all (the Romney campaign denials are utterly worthless, and I hope Sarlin didn’t give them any credence at all), is (far) less than convincing.

Fortunately, others – Brad DeLong, AlterNET – have looked more closely at Ryan’s activities and seen through the holes in Sarver’s supposed “debunking.” Having done so, they’ve resurrected the Ryan insider trading story to where it should have been all along: highly suspicious behavior by Romney’s running mate, behavior that bears serious investigation, and ultimately legal action if appropriate (although my understanding is that Congresscritters exempted themselves from laws that would have sent you and me to jail for the same exact behavior. Nice, huh?).