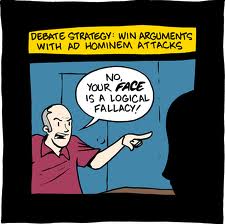 Take a look through this list of “informal fallacies” — logical flaws based on arguments whose stated premises fail to support their proposed conclusion. As you can see, there are a lot of them, ranging from the classic “slippery slope” argument; to various appeals to emotion (fear, ridicule, etc.); to ad hominem attacks; to arguments based on misrepresentation of an opponent’s position; to one of my favorites, “post hoc ergo propter hoc” (“after this, therefore because of this”). On and on they go, and where they stop…actually, that would be at the Romney campaign and its corporate and right-wingnut allies, where they have poured tends of millions of dollars into a campaign based almost completely on various logical fallacies. It’s really endless, but for now, here are my Top 10, with a quick example for each.

1. Fallacy of quoting out of context. “You didn’t built THAT” is the best example of this logical fallacy I’ve seen in many years. Of course, what President Obama was referring to was that one individual, or even several individuals, didn’t build – indeed, couldn’t possibly build – the U.S. education system, our roads and bridges and railroads, our military, our first responder systems, our power grids, our financial system, etc, etc. In the “you didn’t build that” case, Obama’s meaning was 100% obvious from the context of what he was saying, and only a willful quoting out of context could possibly twist it into anything else. Romney et al. managed to do it, though. Ugh.

2. Appeal to fear (“a specific type of appeal to emotion where an argument is made by increasing fear and prejudice towards the opposing side”). I probably should have put this one first, because it’s been behind many if not most Romney and Republican attacks on President Obama since 2008. Thus, somehow a guy who’s essentially a Dwight Eisenhower Republican in many ways is transformed into a “socialist,” “communist,” “Kenyan anti-colonialist,” “redistributionist,” “Muslim” (as if there’s something wrong with that anyway), blah blah blah. Yes, it’s all a disgusting appeal to the worst angels of our natures (fear, ignorance, bigotry, etc.), but Republicans are masters at this, and have been for years (remember the “Southern Strategy?” Lee Atwater? Jesse Helms? Willie Horton ads? Swift Boating?). And it tends to work.

3. Wishful thinking (“a specific type of appeal to emotion where a decision is made according to what might be pleasing to imagine, rather than according to evidence or reason”). This is another classic of Republicans, and certainly the Romney campaign. For instance, they claim that if we just remove “burdensome regulations” (there’s zero evidence that this supposed “burden” has increased under President Obama, of course) and cut taxes on the wealthiest Americans (“supply side”/”trickle down” economics), then happy days will be here again. There’s no evidence for any of this, of course, and tons of evidence against it, but in Republican la-la land, wishing apparently DOES make it so. In their own minds, that is.

4. Post hoc ergo propter hoc (“after this, therefore because of this”). There are many examples of this, but perhaps the biggest one used by Romney and Company is that the economy’s not very good right now, ergo the guy currently sitting in the White House is not just to blame, but apparently 100% to blame. This one is so absurd it should just be laughed at. In reality, the recession started in December 2007, over a year before Barack Obama took office. Also, the Wall Street and housing bubble busts occurred…wait for it…yes, when George W. Bush, NOT Barack Obama, was president. And, of course, the U.S. economy has added private sector jobs for 29 straight months now, compared to losses of around 800,000 a month towards the end of the Bush presidency, with the unemployment rate down almost 2 percentage points from its peak (a few months after Obama took office; remember, it takes time to turn a gigantic supertanker like the U.S. economy around; Romney himself basically argued this). Yet, somehow, Republicans twist this all to say “the economy’s bad, ergo the guy currently sitting in the White House is 100% responsible for causing it.” Crazy, yet when people are hurting, they sometimes are willing to believe things that make no sense whatsoever.

5. Thought-terminating cliché (“a commonly used phrase, sometimes passing as folk wisdom, used to quell cognitive dissonance, conceal lack of thought, [provide] entertainment, move onto other topics etc. but in any case, end the debate with a cliche-not a point”). This sums up a great deal of the Romney campaign, and Republican campaigns more broadly. Who even knows what they’re talking about much of the time, but they love couching it as what “the American people want,” or “common sense,” or just meaningless/embarrassing drivel (e.g., Romney blathering about how in Michigan, the trees are the right height).

6. Argumentum ad populum (“where a proposition is claimed to be true or good solely because many people believe it to be so”). Closely related to fallacy #5, whenever you hear a Republican use phrases like “the American people believe” or “what the American people want,” it’s almost certain that this is a) not the case; and b) not a real argument for why a proposition is true or good.

7. Slippery slope (“asserting that a relatively small first step inevitably leads to a chain of related events culminating in some significant impact”). Another classic non-argument by Republicans, in which they claim, for instance, that an idea – let’s say the “individual mandate” or “cap and trade,” both of which originated with and were promoted (for many years) by conservative Republicans – will inevitably lead to ruination, socialism (like in EVIL Canada or England!), “a government takeover of [fill in the blank],” blah blah blah. Just remember: they ALWAYS say this crap, and it’s NEVER true.

8. Straw man (“an argument based on misrepresentation of an opponent’s position”). Very similar to #1 (“Fallacy of quoting out of context”, but broader and more insidious. For instance, Romney has claimed that Obama has “apologized” for America (yeah, tell that to Osama bin Laden, al Qaeda, and others on the receiving end of U.S. drone attacks), or that somehow “Obamacare,” which is essentially identical to Republican health care proposals including “Romneycare,” is an indication of Obama’s desire that the U.S. health care industry be “taken over” by the government, yadda yadda. If only this straw man had a brain!

9. Appeal to wealth (“supporting a conclusion because the arguer is wealthy…or refuting because the arguer is poor”). Another classic Romney/Republican argument, which can be summed up as “I’m rich, therefore I deserved it due to my hard work, ingenuity, etc. (forget about that huge inheritance and all the other advantages that were handed to me on a silver platter); you’re poor, therefore you deserved it because you’re lazy, shiftless, etc.”

10. (shifting the) Burden of proof…”I need not prove my claim, you must prove it is false”. The Republicans have thrown the kitchen sink of outrageous and utterly false accusations – he wasn’t really born in Hawaii, he really “palled around with terrorist,” he’s really a commie/pinko in disguise, he really hates America, he’s not really a Christian as he claims he is, etc., etc. – against Barack Obama, and basically arguing that he’s the one who must prove them false. Yes, it’s completely crazy, but there’s a method to their madness: namely, that a lie, if repeated often enough (e.g., in ads funded by tens of millions in right-wing billionaires’ money), can start to be believed.