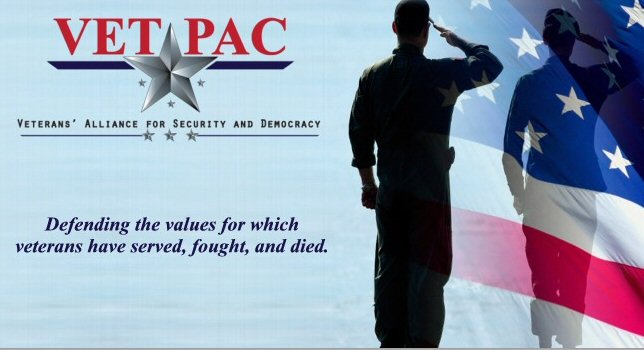 In response to vicious attacks by a regular radio host and ally of Congressman Robert Hurt (VA-05), VETPAC issues the following statement in defense a thirty-five year veteran of the United States Air Force and VETPAC-endorsed candidate John Douglass:

"It's disgusting that Robert Hurt, a sitting Congressman and regular guest of The Schilling Show, would remain silent as shock jock Rob Schilling does Hurt's dirty work by launching into a vicious tirade that smears the good name of a 35 year veteran who served both Presidents Reagan and Clinton. We call on Congressman Hurt to condemn this type of swift-boat style gutter politics and refrain from future appearances on The Schilling Show.

General John Douglass has served our country for more than 35 years, under President Reagan and President Clinton, working his way up to the highest levels of our military. General Douglass was responsible for President Reagan’s Strategic Modernization Program and often briefed the president directly on key Defense and National Security Programs. Upon his retirement from the Air Force, President Clinton asked General Douglass to serve as Assistant Secretary of the Navy for Research, Development and Acquisition. He was responsible for ensuring that our Sailors and Marines were fully supported with the ships, aircraft, weapons systems and equipment that they needed to fight and be safe."

About VETPAC: VETPAC is America’s premier political action committee formed by veterans, working on behalf of veterans who want to continue
their service to our nation in Congressional office. We support a growing community of candidates who share our values on issues vital to American stability: National security policy that is supportive of a strong military that is designed to face modern threats, and recognizes that not all threats can be solved by force alone; an open, democratic process in the United States and abroad; and support for those who serve while they’re both on and off the battlefield. Visit us at www.vetpac.org

Congressman Hurt’s failure to speak up since learning about his radio host’s incendiary attacks adds insult to injury to veterans across the country who deserve to be honored for their service instead of bashed over the public airwaves. Tolerating this type of nastiness has a chilling effect on our returning heroes who are ready to continue their public service in elected office. I urge WINA radio to suspend Rob Schilling from their line up until he publicly apologies and for Congressman Hurt to publicly pledge to no longer appear on the show.

UPDATE #2: As does VoteVets.org

VOTEVETS.ORG REPUDIATES ANTI-VETERAN COMMENTS FROM ROB SCHILLING; CALLS ON REP. HURT TO DO THE SAME

Charlottesville, VA – The largest group of progressive veterans in America, with over 220,000 supporters – VoteVets.org – is repudiating an anti-servicemember, anti-veteran rant from conservative radio host Rob Schilling.  On a recent broadcast, Schilling smeared the service of Congressional candidate John Douglass, a retired Air Force Brigadier General, calling him an “empty uniform” and “chickenhawk.”

Rob Schilling hasn’t just insulted John Douglass, who served this nation honorably, with his shameful rant – he’s dishonored every one of us who have served in the military and are still serving.  That includes my daughter, who is currently serving in Afghanistan , and has previously  served in Iraq, as well as my son-in-law who has done the same. Further, this screed seems to come from a very small mind, who probably has never served in the military a day in his life. In my opinion, this is a sad attempt for Schilling to increase his ratings, and also an attempt to draw attention from where it belongs –  on the issues facing the 5th District. The fact is, John Douglass volunteered for service, and served honorably for decades. Electing him isn’t just about those of us who served, but it’s also about leaving a better world to our children and our grandchildren, with a more polite society — hopefully one where we respect those who served our nation, and don’t verbally spit on them, as Rob Schilling has done.  Rob Schilling’s rants and venom may get him ratings but is not in keeping with civil discourse and our democratic principles, to include respect for others. I would hope that, despite being John Douglass’ opponent in this race, Congressman Hurt would agree about the need for that more respectful society, and I’d hope that he would join me in condemning Rob Schilling’s shameful remarks.

Founded in 2006, the mission of VoteVets.org Political Action Committee is to elect Veterans to public office, with a focus on Iraq and Afghanistan veterans, and hold public officials accountable for their words and actions that impact America’s 21st century troops and veterans. Though VoteVets.org PAC is non-partisan, candidates it backs must support VoteVets.org’s core mission and beliefs.