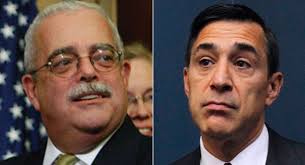 Good for Rep. Connolly, calling out the wildly irresponsible demagogue Darrell Issa for endangering American lives, exposing sensitive information on our operations in Libya, etc. Isn’t that what used to be known as “treason?”

Congressman Gerry Connolly (D-VA), a member of the House Committee on Oversight and Government Reform, issued the following statement in response to Chairman Darrell Issa’s decision to publish sensitive documents about U.S. operations in Libya that could endanger the lives of U.S. personnel and Libyans working with them.

Chairman Issa’s decision to publish sensitive information that details ongoing U.S. operations in Libya and identifies, by name, Libyans working with us to achieve strategic national security goals in the region is extremely troubling.

Those of us entrusted with sensitive national security information must exercise extreme caution with the use of that information. Clearly Chairman Issa, in his zeal to damage the Administration, failed to exercise that caution.

The irony is that while Chairman Issa purports to be sincere in his desire to investigate the recent attack so that we can learn how best to protect our diplomats in the future, his own actions have now compromised the safety of U.S. personnel and Libyans working together to forge a better Libya.

Once again, Chairman Issa’s actions are a stain on the once-impeccable reputation of the House Oversight & Government Reform Committee. While the damage has probably already been done, I call on Chairman Issa to remove all sensitive and personal information from the Committee’s website. It is time for Chairman Issa to stop playing politics with our national security.

Good to see @ChazNuttycombe move VA05 to "Tilt D," based on Bob Good (R)'s "consistently weak campaign throughout the year" while Webb's run a "formidable campaign"; "most Republican and Democratic operatives I’ve spoken with believe that Webb will win" https://bluevirginia.us/2020/10/wednesday-news-as-arctic-methane-starts-to-release-trump-makes-a-final-push-against-climate-science-trumps-closing-pitch-is-based-on-an-avalanche-of-lies-virus-cases-are-spiking-just-w#comment-5127944446