I posted this on Raising Kaine on 2/6/05 (yes, I’ve been blogging about Virginia politics for that long – yikes!), thought it was appropriate to re-post here given the VP debate last night.

Joe Biden: Most Significant Struggle Since 1932 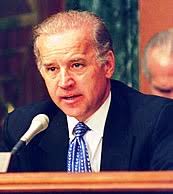 In a 45-minute speech at last night's Jefferson Jackson Day dinner in Richmond, covered by two members of RaisingKaine, Joe Biden gave a powerful, blistering keynote address which tore into the Republicans as dangerous extremists who "say things that sound crazy, but are absolutely serious."

Before getting to the core of his speech, Biden teased the crowd that he and Mark Warner could run in 2008 ("My name is Joe Biden and I'm here to audition for Vice President of the United States of America" and even more obviously, "When I'm Mark Warner's Vice President").  Biden also hinted strongly that Mark Warner might run in 2008, and that if he did he would make a fine candidate.

In the core of his speech, Biden focused on the Republicans' plans for this country and how we Democrats underestimate them to our own grave peril.  Some of Biden's key points included: