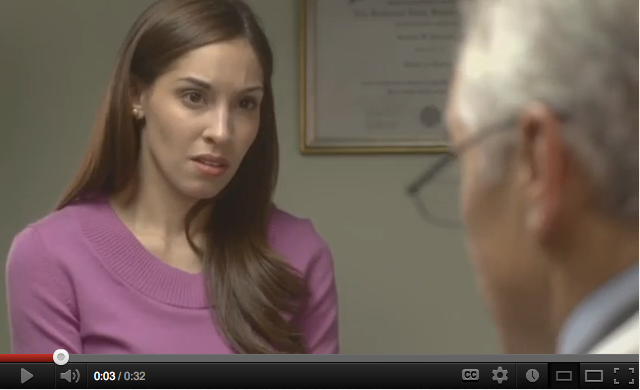 We just launched a brand-new ad this morning, entitled “Women’s Health.” In it, a woman sitting in an examination room notices a large cardboard cut-out of majority leader Eric Cantor smiling down at her.

“What’s he doing here?” She warily askes her doctor.

“Eric Cantor?” The Doctor replies. “He thinks members of Congress like him should make your family planning decisions.”

Unfortunately, this doesn’t apply to just him. Mr. Cantor is also a-okay with Members of Congress like Todd Akin and Richard Mourdock having a say as well.

Now Todd Akin has drifted from the public consciousness somewhat following Richard Mourdock’s jaunt down bonehead lane. But we all know him. He’s the man who made “legitimate rape” a household term. And he’s also the man with which Eric Cantor joined to cos-sponsor or support 32 anti-choice, anti-women, anti-sense bills in the House.

And then there’s Richard Mourdock, the male politician who stood before a crowd of people and proudly asserted that if a woman were to get pregnant as a result of a rape, it was “God’s will.” The same politican who Eric Cantor refuses to denounce.

With company like this, it’s a wonder than Eric Cantor can even claim to support the women of his district with a straight face. After all, unlike Mitt Romney and Paul Ryan, Eric Cantor hasn’t sought to distance himself from either Akin or Murdock one iota.

Then again, it’s hard to speak up for what’s right when you’ve based your career on silent, cowardly ascension.

Which brings us back to our new ad. Eric Cantor’s voting history, his co-sponsorships and his lack of character when confronted with extremists in his own party paint a very clear portrait of an ideologue who’s antiquated views have no place in the 21st century.

Wayne Powell released this ad because he is the exact opposite of Eric Cantor. He believes that women are smart enough and responsible enough to make their own decisions. He believes that the government has no place in a woman’s personal healthcare deliberations. And he believes that we won’t get anywhere as a nation if we continue to demonize and scapegoat more than half of our population.

Our country is facing a crisis right now. Too many powerful men who call Eric Cantor “leader” are using their influence to punish, to denigrate, and to shame. But with Wayne Powell’s help, we can begin to stem this awful tide.