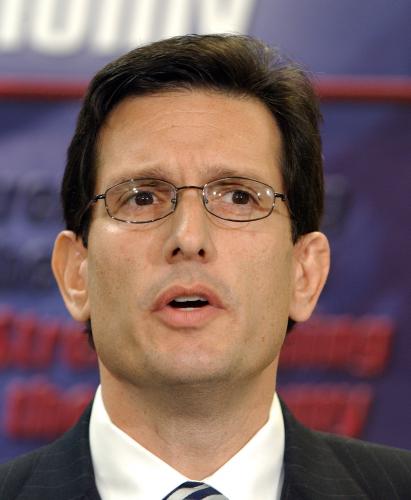 Recently, Rep. Eric Cantor has been flooding the airwaves and people’s mailboxes with attack ads aimed at Wayne Powell, the candidate that Cantor’s own senior strategist called the congressman’s “most serious opponent to date.”

Beyond mailers and television ads which cite Cantor’s own website as their factual source (something every freshman English class warns against), Mr. Cantor has also gotten some mileage out of a subpoena he attained that requests that Wayne appear in court to answer for a bar complaint.

Forget for a moment that the original complaint from 2011 was tossed out by the presiding judge, or that the individual that filed this recent complaint is a former Republican staffer. What we would like to know is how in the world did Cantor get his hands on a subpoena before it had even been delivered to its intended recipient?

A willingness to abuse power and the desire to grasp at straws is a dangerous combination, it seems.

Speaking of grasping at straws, with all of the noise the Cantor’s camp has made these past few days over trumped-up and dubious claims of impropriety, we were curious if all of Cantor’s hot air was just an attempt to dissuade inquiring minds from looking into his own legal history.

And we’re glad we did.

Because it seems Mr. Cantor hasn’t been completely honest when it comes to his former career as a lawyer with a tax collection agency.

You see, when a lawyer is elected to Congress, they are required by law to recuse themselves from their legal practice and forego the income they would have otherwise made. Small price to pay for becoming one of only 437 individuals tasked with setting the legislative goals for an entire country, right?

Maybe not to Eric Cantor. Put simply, when he was first elected, in order to comply with congressional regulations,  Mr. Cantor “sold” his portion of the legal firm Cantor & Cantor. However, instead of paying him for this sale, the firm simply gave him a promissory note, a note he has held for over a decade and continues to claim on his congressional finance reports.

And therein lies the problem: This seemingly-innocuous note doubles as monetary stake in the company. And despite making over $5 million over the last 11 years, Cantor’s former law firm has never gotten around to legitimately purchasing his portion of the firm. The result?

Eric Cantor, the self-appointed crusader for law-firm ethics, maintains control of a segment of a wildly-successful collection agency that he claims to have sold years ago.

As Wayne’s campaign manager Christian Rickers put it, “It’s hard to believe Cantor’s firm took in over $5 million from a no-bid contract, he’s still holding a note after all these years, and there’s been no hanky panky.”

If you’re going to spend money, time and effort falsely criticizing someone, the least you can do is make sure you aren’t guilty of the type of wrongdoing you yourself have spent months condemning.

Eric Cantor is grasping at straws all right, but unfortunately for him, he just drew the short one.