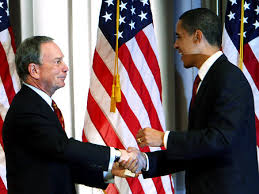 [Mitt Romney] couldn’t have been more right [about tackling climate change as governor of Massachusetts, including “sign[ing] on to a regional cap-and-trade plan designed to reduce carbon emissions 10 percent below 1990 levels”]. But since then, he has reversed course, abandoning the very cap-and-trade program he once supported. This issue is too important. We need determined leadership at the national level to move the nation and the world forward.

…In the past [Mitt Romney] has also taken sensible positions on immigration, illegal guns, abortion rights and health care. But he has reversed course on all of them, and is even running against the health-care model he signed into law in Massachusetts.

If the 1994 or 2003 version of Mitt Romney were running for president, I may well have voted for him because, like so many other independents, I have found the past four years to be, in a word, disappointing.

As for President Obama, Mayor Bloomberg says he has “achieved some important victories on issues that will help define our future”: on education, women’s and LGB T rights, and the “urgent problem that threatens our planet” – climate change. That’s about as stark a contrast as one could imagine between the two candidates seeking the highest office in this country. The clear choice, in Mayor Bloomberg’s view, is Barack Obama. Obviously, I couldn’t agree more, both with Bloomberg’s choice and also with his reasoning (particularly regarding climate change, the most important issue facing mankind BY FAR, yet one that has been almost completely neglected in this abysmal presidential campaign).