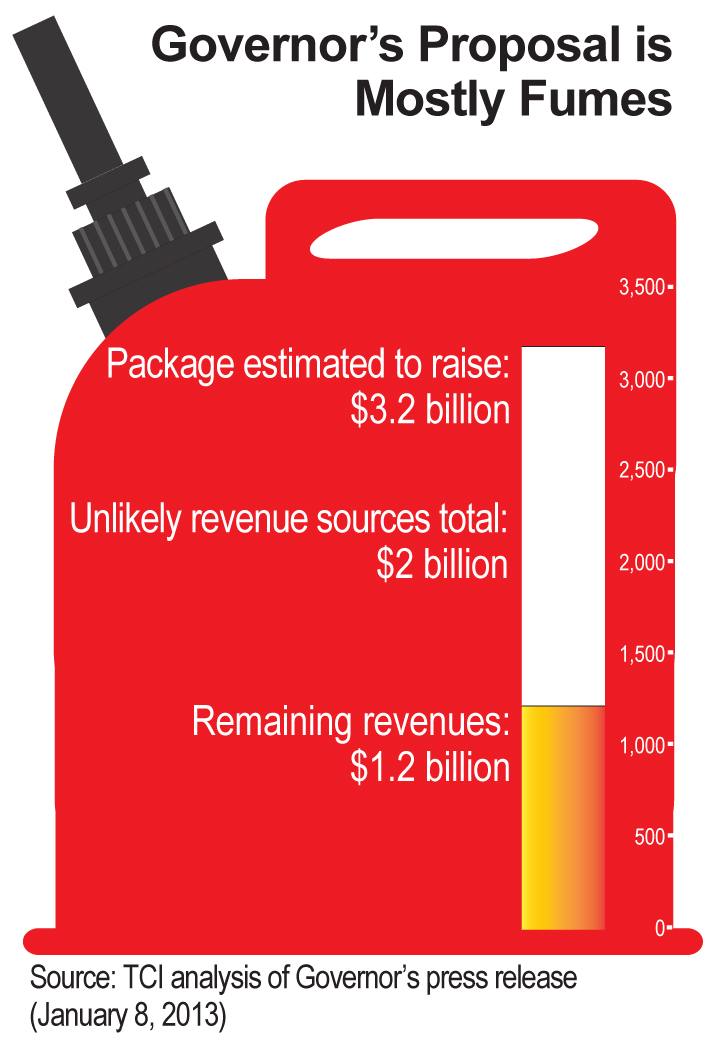 Anyone who looks Bob McDonnell’s transportation plan for more than about 2 seconds – or, if you REALLY want to study it, you could spend the time most Virginians sit stuck in traffic every day – quickly concludes that it’s inadequate, that the numbers don’t even come close to adding up, and that it’s bad public policy on a number of levels (e.g., why would we want to CUT fossil fuel taxes when the #1 problem facing humanity is global warming?!?). In short, McDonnell’s latest transportation “plan” is smoke and mirrors, just like McDonnell’s previous transportation “plans” – privatizing liquor stores, offshore oil drilling, tollbooths at the North Carolina border, pixie dust and unicorns, whatever. As we say on Twitter, it’s a big-time #FAIL!

But don’t take my word for it, or the word of many transportation experts in Virginia, or most Virginia Democrats. Now, we’ve got a study by the Commonwealth Institute – the goal of which is to “[provide] credible, independent and accessible information and analyses of fiscal and economic issues facing Virginia with particular attention to the impacts on low- and moderate-income persons” – which should put the nail in the coffin of McDonnell’s monstrosity. Here’s the bottom line:

The governor’s proposal to address Virginia’s transportation crisis has two major flaws under its hood. It derives more than two-thirds of its revenue from sources that are tentative, at best. And, even assuming the plan is approved as the governor envisions, it falls far short of what Virginia needs to repair and maintain existing roads, bridges and other infrastructure that businesses rely on to get their goods to market and that commuters need to get to work, school and other places.

Over 60 percent of the $3.2 billion in new resources fueling the governor’s proposal would come from two sources: the diversion of existing sales tax revenue and the diversion of new  revenue generated from proposed federal legislation, known as the Marketplace Equity Act, that would allow Virginia to tax online sales. Both face extremely uncertain political futures. If they fail to pan out, the plan stalls, leaving the governor’s proposed solution out of gas.

In other words, as the Commonwealth Institute points out, McDonnell’s “plan” (using the word very loosely) is running on “mostly fumes.” Not to mention that it completely lacks any vision for transportation in Virginia, beyond more of the same ol’ same ol’ – sprawl, gridlock, and pollution as far as the eye can see. Also not to mention that it removes a key linkage between the usage of our state’s transportation infrastructure, and those who pay for that transportation infrastructure. Last I checked, that’s about as un-conservative as you can get (see the super-“conservative” Wall Street Journal editorial on how “the gas-tax-for-sales-tax swap violates the user pays principle of sound tax policy”). As I said earlier, it’s a #FAIL for Bob McDonnell no matter how you look at it.