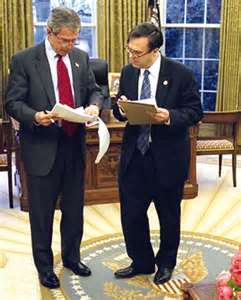 Start off with flawed – or totally wrong – premises, and it’s highly unlikely that you’re going to end up with the correct conclusions. Sadly (for Republicans, anyway), that’s exactly what Dubya’s former chief speechwriter Michael Gerson and Republican politico Peter Wehner manage to do in their new Commentary piece, “How to Save the Republican Party”. There’s so much muddle-headed “thinking” here, it’s hard to know where to start. Here are just a few big ones.

1. Gerson and Wehner argue that Republicans aren’t really beholden to “millionaires and billionaires,” aren’t really “out of touch with ordinary Americans,” and aren’t really “engaged in class warfare on behalf of the upper class.” But of course, as we all know, they very much are all of those things. Thus, we have Republican elected officials voting time and again to protect the wealthy at the expense of the middle class. We have Republicans lavishing corporate welfare on powerful corporations, yet opposing a small increase in the (pathetically low) minimum wage. We have Republicans dividing America into a nation of “makers” and “takers,” in which everyone who receives Medicare, Medicaid, Social Security, individual welfare (note: corporate welfare is fine and dandy!), food stamps, etc. are “takers,” while everyone else, a la Ayn Rand/Atlas Shrugged, are the put-upon “makers,” who are more than ready to “shrug” off the burdensome 99% of the population.

Bottom line: the Republican Party today is the the party of Corporate Welfare, Crony Capitalism, Big Business, and Reverse Robin Hood Class Warfare (steal from the 99% to give to the top 1%). They receive enormous campaign contributions from all those (wealthy/powerful) folks, are lobbied relentlessly by them, share their values and interests, and have zero desire to break from them. Which is why Gerson and Wehner’s recommendations – e.g., to become “visible and persistent critics of corporate welfare,” to promote social mobility, to be more like Teddy Roosevelt (a great Progressive) – are completely implausible and laughable. In reality, the Republican Party’s goal is anything but “equality of opportunity.” Instead, it’s to do everything it can to keep their entrenched, wealthy and powerful cronies and campaign contributors fat and happy. Why would this change? Sure, losing elections should be a motivation, but I’ll be shocked if that alone trumps the crony capitalists’ economic self interest in maintaining their Reverse Robin Hood gravy train.

2. It’s hilarious to hear these two establishment Republicans using language that, if a Democrat (especially the “Kenyan” “socialist” in the White House) said it, would be considered “communism” or whatever. Yet here we are with Gerson and Wehner waxing rhapsodic about the benefits of the “common good,” “community or social solidarity,” “the obligations and attachments we have to each other,” and “the Catholic doctrines of subsidiarity and solidarity with the poor.”

Wait a minute, isn’t all that exactly what Barack Obama and the Democratic Party already stand for? And isn’t all that constantly demonized by the Republican Party, not to mention the Rand Pauls, Rush Limbaughs, Sean Hannitys, Ted Cruzes, Tea Partiers, “we built that!” folks, etc? Finally, isn’t it government of/by/for the people which is there to look out for the common good, and to provide a check and balance (along with organized labor) against the unbridled greed of the the private sector? Well, yeah, obviously. So what do Gerson and Wehner have to offer, exactly? “[W]ays to protect the charitable sector from federal aggression?” Huh? The federal government’s at war with charities? Who knew? How about “a concerted effort to encourage civic and cultural assimilation of immigrants?” You mean, the same immigrants the the Republican presidential nominee in 2012 said should “self deport?” Gotcha.

3. Gerson and Wehner argue that “the GOP can engage vital social issues forthrightly but in a manner that is aspirational rather than alienating.” What does that mean exactly? Are Republicans going to stop trying to shut down abortion clinics, stop forcing women to have invasive ultrasound procedures, stop waging war against contraception and Planned Parenthood, stop voting against laws to provide equal protection for LGBT citizens, stop opposing even such a no-brainer bill as the Violence Against Women Act? Who cares about the Republicans’ “manner,” when it’s their substance that’s all wrong on “vital social issues?” And the fact is, as long as the Grumpy Old Party is beholden to the Pat Robertson religious (far) right, none of this is going to change. Again, though, just as with the GOP being in bed with the rich and powerful, how do Gerson and Wehner propose the Republican Party tell Robertson et al. to take a long hike off a short pier? Got me.

4. Finally, while I agree with Gerson and Wehner that “Republicans need to harness their policy views to the findings of science,” there are a few big – possibly insurmountable – obstacles to overcome before they do. On climate science, for instance, if Republicans were to really accept what 97% of climate scientists know, that human emissions of greenhouse gases (largely from the combustion of fossil fuels) are rapidly and dangerously changing the climate, then the implications would be to get off of carbon-based fuels ASAP. Yet the GOP is funded, as well as controlled, to a large degree by those very fossil fuel interests, and the last thing the Koch brothers, ExxonMobil, etc. want to see is a rapid transition to a clean energy economy. If Republicans try to move in that direction, they’ll be snapped back fast and HARD by their paymasters. How do Gerson and Wehner propose to get around this problem? They don’t say, because obviously they have no clue. And, by the way, even Gerson and Wehner can’t bring themselves to stop lying about what would be needed to stop climate change (e.g, put a price on carbon!). They also can’t help themselves but to lie about the conservative basis of ideas like a carbon tax (thereby correcting a clear and enormous market failure), or the conservative Republican idea of “cap and trade.” Instead, Gerson and Wehner kill all their credibility by demonizing these conservative, Republican ideas as “Al Gore’s policy agenda,” or as “top-down approach of unwieldy government bureaucracies offering huge subsidies to favored companies such as Solyndra” (that’s quite a mouthful…of bile and bull****).

The bottom line is this: even when leading Republican “thinkers” (using the word loosely) like Michael Gerson and Peter Wehner take a stab at thinking through a reboot of the Republican Party, they fail miserably, because they ultimately can’t manage to look at things objectively, clearly, and with courage. In the end, what the Republican Party needs to do is clear: return to its roots as a serious, right-of-center (yet also broadly Progressive – not a synonym for “liberal” by the way – in the Abraham Lincoln, Teddy Roosevelt, Bob LaFollette, Dwight Eisenhower, John Chaffee, Lowell Weicker, Jacob Javits, Nelson Rockefeller, etc. tradition) party. It also needs to ditch the Pat Robertson right, become a secular party that “believes” in science again, get with modernity, and stop trying to take America “back” to a time when wealthy white men had all the rights, and everyone else was pretty much powerless. Then, we’ll see what happens. Until then, the GOP – and its “thinkers” like Gerson and Wehner – will remain lost in the political wilderness, increasingly out of touch with a population that simply doesn’t think like them anymore, and whose economic interests are in stark conflict with the Robber Baron Republicans. Until that day comes, if it ever does, the job of everyone else in the country is simply to beat these guys (and yes, they’re mostly guys), until hopefully they wake up and finally get a clue. Personally, I’m not holding my breath.

UPDATE: Whoops, forgot to mention, they are also completely off base when they write, “Barack Obama has put in place an agenda of unreconstructed progressivism that is at war, not only with Reaganism, but also with Clintonism.” That’s just laughable on every level. The signature accomplishment, “Obamacare,” was modeled after “Romneycare” and the 1993 Republican alternative to “Hillarycare.” Not single payer. Not Medicare for all. Not even a public option. Instead, Obamacare keeps in place and even reinforces the for-profit healthcare model. Soooo progressive! LOL

Other than that, the “stimulus” was heavily (foolishly!) weighted towards tax cuts, and also far too small, as Nobel Prize-winning economist Paul Krugman has pointed out repeatedly. On foreign policy, Obama’s been pounding Al Qaeda with drones and special forces. He’s had an “all of the above” energy strategy, which many environmentalists oppose. I could go on and on, but the point is: Gerson and Wehner are utterly delusional if they believe that Barack Obama has been pushing “an agenda of unreconstructed progressivism.”