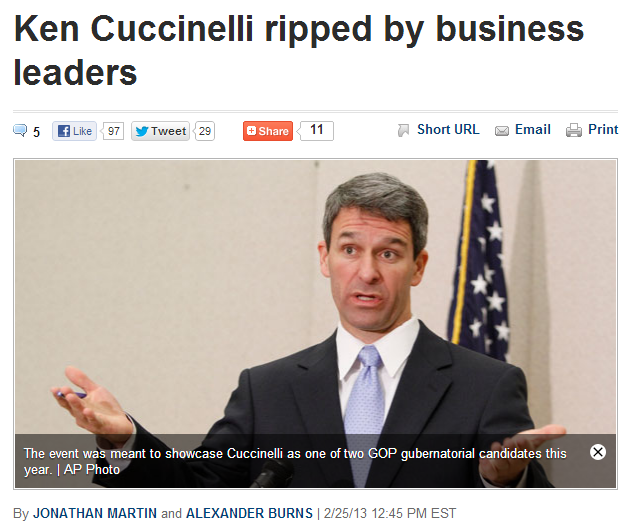 This article really says it all:

Bobbie Kilberg, a longtime Republican donor and CEO of Northern Virginia Technology Council, and Gary Shapiro, CEO of the Arlington-based Consumer Electronics Association, stood up separately to confront Cuccinelli about what is on the minds of many Virginia and national Republicans: whether the Tea Party-backed attorney general can, or wants to, run a pragmatic campaign in the increasingly moderate Old Dominion.

[Gary] Shapiro spoke up next and was even tougher on Cuccinelli. As a hushed room looked on, Shapiro, who sits on the board of the influential Northern Virginia Technology Council, said the state’s centrist-oriented business community won’t back the Republican standard-bearer because he’s out of the mainstream.

This article is a must read, certainly by every business leader or owner in Virginia, not to mention every voter in Virginia. What baffles me is how anyone, other than the most extreme right-wing nutjob, could support Kookinelli. Sure, I can understand how Republicans and conservatives would support Bill Bolling, although obviously I disagree with them. But at least Bolling is sane. Kookinelli? The nickname says it all: the guy’s completely bonkers, one of the most extreme and bizarro politicians in America, along with people like Todd “Legitimate Rape” Akin, Richard “Another Crazy Comment About Rape” Mourdoch, Christine “I am not a witch” O’Donnell, Rand “Aqua Buddha” Paul, etc. The bottom line: if we want to make Virginia completely unattractive to new residents and businesses, let’s elect a guy who bashes LGBT people, who thinks government should be telling women (and men) what contraception they can and can’t use, who denies science and persecutes scientists because he doesn’t “like” their findings (too freakin’ bad, dude, that’s not the way it works in this country!), who politicizes everything to the max, who demonizes the government, who makes Virginia national laughingstock, who would never raise a penny in revenues for anything (e.g., education, roads), etc. No thanks!