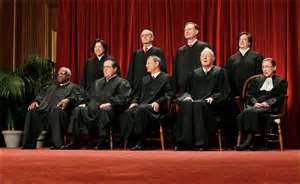 Will the most powerful liberal women in America save Ken Cuccinelli from the 200-proof political disaster being urged by a few Arrogant Alabama firebrands? These Deep South conservatives were at the U.S. Supreme Court yesterday, urging the Justices to overturn Section 5 of the Voting Rights Act of 1965. They were making surprising legal headway with their 200-proof political dynamite until the court’s reliable liberal bloc – three increasingly influential female jurists – intervened in an effort to rescue the Virginia AG’s gubernatorial campaign from fellow conservatives. In their prime, hard rockers AC/DC shook up Washington one night with the opening lyrics to T.N.T. their mega hit:

See me ride out of the sunset.

On your color TV screen.

Out for all that I can get.

If you know what I mean.

Women to the left of me,

Women to the right.

Ain’t got no gun.

Don’t you start no fight.

For 50 years, Section 5 has required every jurisdiction in Alabama and also Virginia, to “pre-clear” even the smallest change to their voting laws with the U.S. Department of Justice or the federal court in DC. Conservative scholars regard this legal situation as making Alabaman’s second-class citizens, wards of the national government, having to get permission to change even the location of a polling place.

They note that all the 9 state’s fully covered under Section 5 are from Dixie. They consider the requirement of “preclearance” to be a the modern equivalent of “reconstruction”, the term given to the post-civil war period when the Northerner’s running Congress required the former rebellious slave state’s to be run by federally appointed overseers.

For 50 years, conservatives have chewed this old rag. You would think conservatives would give their constitutional argument a rest. The Civil War Amendments provide Congress the right to ensure the most important political promise ever penned by anyone – “All men are created equal” – by “appropriate legislation.” What is “appropriate”? This is a fair question, and the Supremes will likely have to answer it in the Alabama case.

This column, however, is about 200-proof politics, not constitutional law. So the above is only to set the stage for the following discussion: The 100% guarantee that if the three liberal female Justices can’t stop their colleagues from overturning Section 5, then Ken Cuccinelli is a sure loser this November.

It has been almost a quarter-century since five Supreme Court Justices, at the urging of conservative legal thinkers, decided to elect a Democrat as the next Governor of Virginia. Until the Supremes took a chunk out of Roe v. Wade in June of 1989, Democratic candidate, Doug Wilder, had no – as in NADA – chance to win. He was done big in the polls with no path to victory apparent. But the 5-4 decision in the Webster case put the abortion issue front and center. Wilder decided to take the most radical and unorthodox position on the issue for a candidate for governor in a Southern state, at least one that had won. The strategy worked, barely. As several books have noted, the way the Wilder campaign conceived the issue changed the abortion debate forever.

Here in 2013, the Supremes seem determined to hand the historic Virginia Governor’s Mansion over to yet another Democratic gubernatorial nominee, Terry McAuliffe. This time, however, T-Mac is the strong favorite. Underdog Ken Cuccinelli still has a chance of winning: if the Supreme Court’s liberal women justices – all three appointed by Democrats – can save him.

But when conservative legal guru Justice Anton Scalia showed his utter contempt – or perhaps only a total insensitivity to the realities of American history – the women decided it was time to put on a legal clinic. I think they pulled a rabbit out of the legal hat with several brilliant points, especially the one raising the question of whether the petitioners in this case made the proper plaintiffs for such an historic overturning of years of Supreme Court precedent. This was truly an inspired audible at the line of scrimmage. If you are going to overturn 50 years of jurisprudence, you had best have winners who seem worthy. The Alabama petitioners are not, as the women pointed out.

Thus the 200-proof politics. If Section 5 is overturned, there will be a major backlash from key Democratic constituencies and a smaller but important one from moderate Republican voters. It will not boost conservative turnout in 2013. Thus, on a net-net basis, it will be worth 2-3 percentage points to T-Mac and the entire Democratic state ticket. The Cuccinelli for Governor campaign doesn’t seem able to carry that much extra weight.

But fear not Ken: The women, on the left, are trying to make things legally right for you. The VRA is not a big issue anymore in Virginia politics. It was as recently as 1981, when it nearly caused Chuck Robb to make a huge mistake out of political fear. To be sure, Section 5 still rankles conservatives like Cuccinelli. “But if it ain’t broke, don’t fix it” is still the motto for sensible conservatives.

So yes, we can presume Cuccinelli agrees with the basic conservative argument about Section 5 being a federal overreach, and that Virginia’s voting record now is way different than when the VRA was first enacted. But Congress recently extended the law with few dissenters. Congressman Eric Cantor and others get it: the VRA has been great for the country, great for Virginia, move on.