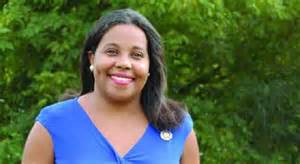 I had the opportunity yesterday to sit down with Democratic Party of Virginia Chair, Del. Charniele Herring, for an hour-plus discussion/interview in Alexandria on turning Virginia blue, on winning in 2013, on building the state party and Virginia Democrats’ “farm system,” etc. Thanks to Del. Herring for her time; I greatly appreciate it. Here are some highlights from our discussion.

1. According to Del. Herring, the 2009 elections in Virginia were a case of conservatives mobilizing, in the aftermath of their defeat in 2008, “to their benefit,” while Democrats basically went to sleep. For instance, Herring won her January 2009 special election, in the solid blue 46th district (Alexandria), by just 16 votes, as Democrats “were tired” and didn’t go vote. Later that same year, as we all know, Democrats were wiped out for governor, LG, AG, and the House of Delegates. The lesson: “every vote matters,” and also we can’t ever go to sleep or take anything for granted. Certainly, we’d better not do either of those things in 2013, unless we like the thought of saying “Governor Cuccinelli” for 4 years. Nope, didn’t think so.

2. Del. Herring said we’ve been recruiting candidates for 2013, are doing pretty well, but frankly “candidate recruitment is a long-term thing; we’ve got to build a bench.” Of course, Herring pointed out, it’s the House Democratic caucus that is primarily responsible for candidate recruitment for the House of Delegates, while “the party does supplement and provides support” (e.g, voter file, media training, messaging, research, helping to identify donors). According to Del. Herring, “through time we’re going to figure out a better way for candidate recruitment,” but it’s certainly “not easy,” as a lot of people don’t want to go through what it takes to run for office. The bottom line, in Del. Herring’s view, is that it’s going to take time to get back to where we need to be in the House of Delegates: “I think what we need to do is be in a place that in 2020, that we have some control of redistricting…it’s slow building, I can’t sit here and say that we’re going to pick up 10 seats in 2013…we have to just realize the reality of our situation…it’s going to have to be slow, methodical, and deliberate.”

3. According to Del. Herring, in the 2013 campaign, “We’re not going to be duplicating things, which has happened in the past, where the coordinated campaign runs outside the party; everything’s going to be run through the party, so that’s going to help our House of Delegates candidates, the top of the ticket and on down…a unified front.” In other words, this time around, things have to be done differently if we expect different results from the past (if not, it’s the classic “definition of insanity” – doing the same thing and expecting different results), and Del. Herring seems determined to make sure that happens.

4. What are the major issues for 2013? Del. Herring believes that part of it will definitely be pointing out how extreme (“outside the norm of what we’ve known conservatives to be“) the Republican ticket will be on issue after issue. As much as Cuccinelli tries to “normalize himself,” Democrats will need to keep reminding people of how extreme Cuccinelli’s record is and “what he truly is and what he will do if he were to be elected.” We’re also going to hear about transportation, jobs and the economy, women’s reproductive health care, climate change, the assault on science, LGBT equality, the Republican assault on voting rights, etc.

5. In Del. Herring’s view, we can’t just be against Cuccinelli, “we have to promote ourselves, we are…a party of ideas that are fact based, evidence based, reality based…we’re a big tent party…that brings Virginians to a better quality  of life overall no matter their party affiliation,” and we have to talk about all that. In addition, of course we need to remind people of all the extreme things Cuccinelli has said and done. At the same time, the case for Terry McAuliffe will center on job creation, pursuing opportunities like clean energy, keeping Virginia an attractive place for businesses and individuals to live in, being a welcoming place for all people. In Del. Herring’s view, businesses are highly – and legitimately – concerned “about the extremism” of Ken Cuccinelli; “if you’re going to have laws that discriminate,” you’re going to drive talented people away.

6. I asked Del. Herring about the large financial advantage held by the Republican House caucus over the Democratic House caucus and what we can do about that. Part of it, in Del. Herring’s view, is “pooling resources together.” Part of it is tapping into national donors, new donors, potential opportunities with members of the business community who are not comfortable with Ken Cuccinelli. Part of it is that Democrats in deep blue areas need to “step up our games” in terms of raising money for Democrats in competitive/”purple” districts around the state.

7. On the transportation bill, Del. Herring is doubtful that Gov. McDonnell will veto it, but she does think he’ll make changes, possibly with the hybrid fee. We should know the answer to that question within about a week. Del. Herring said her vote for the transportation bill was one of the most difficult she’d ever taken, but she’s concerned about “simple public safety” (e.g, bridges falling apart), and this is the “first time in a generation that we actually were able to get something done,” albeit “not perfect.” Also, if we don’t take care of transportation, Del. Herring believes (and I agree) that Virginia’s business ranking will continue to fall. If Ken Cuccinelli’s elected, this will only get worse; we could fall 9-10 slots in the business rankings, join “some of the more regressive states…that’s what I’m concerned about…it’s ridiculous.”

8. On the role of the state party, Del. Herring believes we need to be constantly working on the ground to develop talent, keeping in touch with voters, working to “maintain our relevance,” “building the bench,” developing “long-term sustainability,” and definitely not just parachuting in at the last minute (e.g., right before an election). This will take a “long-term vision,” looking at our successes and also what we can improve on. Del. Herring sees this as a long-term commitment and definitely plans to be there “for another four years” after her run for reelection this June. The plan is geared towards 2020, towards keeping a continual effort going between elections, “not just sitting in Richmond.” Del. Herring specifically mentioned keeping people in place and being in the community, a la Howard Dean’s 50-state strategy. She also noted Dean’s recommendation to “go out and door knock when you’re not asking for a vote,” the importance of asking people what their concerns are. Bottom line: “We do have a strong case [to make], we’re in a good position, people are energized…and it’s our job to keep [people] energized and focused.”

9. I asked Del. Herring how she viewed bloggers – as enemies, frenemies, friends, or what. She immediately and enthusiastically responded, “friends!” She also said that bloggers’ role is “crucial” in that newspapers read the blogs, that social media “makes a difference and mobilizes people.” “I don’t want it to be adversarial…media makes a difference…politicians have to be amenable to it…you’re connecting with more voters [if you use social media effectively].” Del. Herring definitely sees herself as “grassroots” (“I am such not the insider…I’m an outsider…I am not part of any machine.”). Her background comes out of being homeless as a teenager, living in a shelter when she was 16, and getting into college with the help of the STEP program (“that’s why I believe in government programs…Republicans want to slash it…they’re slashing my future and the future of America”). Without those programs, “my options would have been so limited.” This is about providing citizens with opportunities to move up, giving people chances for social mobility (“I do not want a governor whose willing to be successful and leave other Virginians behind, and that’s what Cuccinelli is about”).

10. Finally, Del. Herring talked about the process for selecting a new Executive Director for DPVA. She said she did a national search, was looking for someone with a diverse experience – fundraising (“that fundraising component that she brings with her and her contacts with national donors is important to me…she has that fundraising experience that will be helpful for us to grow as a party”), political organizing, field, etc., and she feels like she found it in Lauren Harmon.

Again, it was great catching up with Charniele Herring as she settles into her new job as DPVA chair. I hope to do more of these in the future.