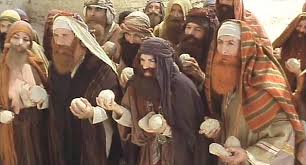 The story of the adulteress about to be stoned to death by a crowd is a case in point. As the scene begins, the focus of attention is the woman who has sinned, but Jesus immediately shifts the focus onto the crowd. “Let him who is without sin cast the first stone.”

What concerns Jesus here, evidently, is much less the misdeeds of the woman than the spirit of the crowd. They are filled with a righteous wrath that’s driving them toward brutally killing the adulteress. By his words –“Let him who is without sin….”– Jesus is saying, “There’s something amiss with you who are so ready to kill someone for going astray when you yourselves, in your own ways, also go astray.”

The spirit of punitive righteousness is NOT what Jesus wants a human community to express.

How does that jibe with the spirit that the Republicans of our times bring into our national community?

How much does a Newt Gingrich reflect this teaching when he denounces Bill Clinton’s dalliance with an intern at the very time, as we later learn, that he himself is engaging in sexual misconduct far more damaging to his own marriage?

How much is this Christian spirit shown by a Rush Limbaugh who denounces drug users, while he has his own problems with using his improperly acquired stash of painkillers?

Where in the whole panoply of Republican stands on the issues –immigration, gay marriage, unemployment compensation, prisons, etc. — do we NOT find the stain of that spirit of punitive self-righteousness that, this story shows, is NOT what Jesus wanted a community to express?

With respect to the sinner, in addition to saving the woman’s life, Jesus parts from her with the words, “Go and sin no more.” It is not that he is indifferent to sin, to people straying from the right path. But he addresses that problem in a spirit of love for the sinner. The words with which he sends her off provide an impetus to help her yet again be rescued to life, to leave behind what has separated her from wholeness and get her life together.

This is how a political force animated by the Christian spirit would deal with those in our nation whose lives have strayed from the path that makes life more whole.

Monday News: “A make-or-break moment for our democracy”; “Why Americans Die So Much”; “Joe Manchin’s selfishness”; “Youngkin is running as Trump-lite”; “It’s a public...