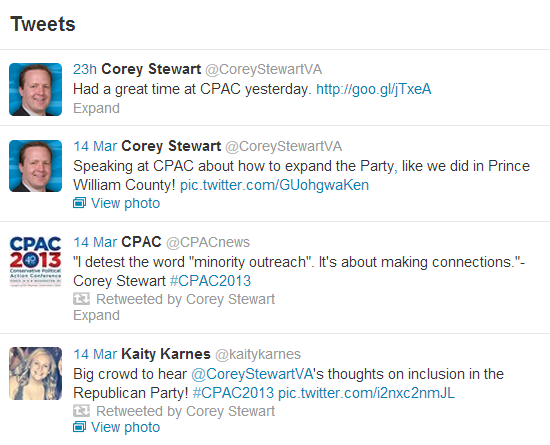 Corey Stewart, conservative candidate for Lieutenant Governor of Virginia, current Republican Chair of the Prince Williams County Board of Supervisors, spoke about the term “minority outreach” as distasteful and inappropriate. As he said, you don’t “outreach” to a friend or your grandmother, you develop genuine relationships. That’s what we need to do in connecting with all voters, of all backgrounds. His past electoral victories reveal that he practices what he preaches: he won elections in a majority minority district at times when other Republicans lost.

How is what Corey Stewart’s saying here any different than fellow Republican GOP LG candidate Susan Stimpson asserting, “[African Americans] wouldn’t be a set constituency that I would try to inspire?” More to the point, why do Republicans keep “digging” when they’re in a deep, deep hole regarding their electoral appeal to non-white voters? Can they simply not help themselves, or what?

Look, I believe that Martin Luther King, Jr. was right, that the goal should be for all of us to judge each other on the “content of our characters,” not on the color of our skin. Sadly, we’re still not there yet, which is why we need to keep working at inclusiveness, at leveling the playing field, and at eliminating the vestiges of racism and bigotry from our society, once and for all. No, I’m not a fan of “identity politics” (“Political attitudes or positions that focus on the concerns of social groups identified mainly on the basis of gender, race, ethnicity, or sexual orientation”), but that’s not what we’re talking about here. Instead, what we’re dealing with right now in this country is a Republican Party that’s gone out of its way, over several decades, to alienate just about every group in this country other than whites. With its Lee Atwater/Karl Rove “Southern Strategy” (a not-so-subtle appeal, “dog whistle” or louder, to white racists, many of whom were formerly “Dixiecrats” – segregationist Democrats back in the days of Jim Crow and “Massive Resistance”), its attacks on “welfare queens” (but never on corporate welfare, which is far larger and far more harmful to our country), and with its bashing of “illegals” (that’s what they charmingly call undocumented immigrants, as if human beings themselves, as opposed to people’s specific actions, can possibly be “illegal”), today’s Republican Party has richly earned the miniscule percentage of the vote they receive in elections from African Americans, Hispanic Americans, and Asian Americans.

As for Corey Stewart, let’s not forget this disgraceful episode (“Racial tension and threats of violence erupt when Prince William County, Virginia adopts a law requiring the police to question people who appear to be undocumented immigrants.”), exemplified by ugliness as depicted in this video (see Corey’s snarling, hate-filled face at 2:58 in). Given his nasty, divisive past, including outright bashing of Latinos, we shouldn’t be surprised that Corey Stewart declares to a conference full of white racists that “I detest the word ‘minority outreach’.” And no, Mr. Stewart, your way is NOT the way the Republican Party is ever going to expand, but as a diehard Democrat, I kind of hope that you guys keep doing what you’re doing, and keep on losing elections.