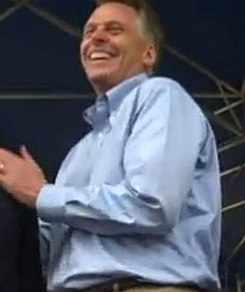 From the Terry McAuliffe for Governor campaign – impressive!

Virginia gubernatorial candidate Terry McAuliffe hand delivered 35,746 signatures to the Virginia State Board of Elections to secure his place on the ballot.  Former Republican Delegates Vince Callahan, Katherine Waddell, businessman Major Reynolds, and supporters from across Virginia joined McAuliffe to deliver the petitions.

“I’m grateful for the support I’ve gotten from folks across the Commonwealth,” said Terry McAuliffe.  “I think this is a testament to the energy and passion there is behind our message of overcoming extreme gridlock to find mainstream solutions on transportation, education, and economic development.  I look forward to continuing to work with Virginians of all political affiliations as we strive to make Virginia the best for business.”

“In turning in three times as many signatures as necessary from every Congressional district, it is clear that Terry is earning support from every corner of Virginia. Terry has traveled to every corner of Virginia and his focus on mainstream solutions for economic growth appeals from Bristol to Virginia Beach to Arlington,” said Del. Callahan.  “I’ve endorsed Terry because I know we need our next Governor to focus on the economy instead of divisive social issues.”

About 500 volunteers carried the petitions and helped collect signatures from across the Commonwealth, including collecting more than three times the required amount from each congressional district.  These signatures include Republicans, Democrats, and Independents who are supporting Terry because he is willing to work with both parties to find solutions on transportation, education and economic development.