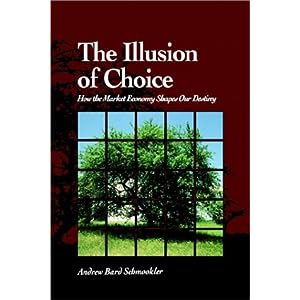 [This is the 14th installment in the “Swinging for the Fences” series. A compendium of the preceding entries, complete with links, is found below the present installment.  This is the second round on how the market economy generates a force that, if uncorrected, drives a society to develop in ways determined by the system rather than chosen by the people who in that society.]

My book, The Illusion of Choice, is about  how the market economy is only partially a means for human choice to determine the course of things.  The system itself has its own inherent dynamic which, if not corrected by means of collective decisions made through government, will take a society in a direction chosen by the system, and not the people.  The market steers in certain directions because it sees and is responsive to some areas of value while it is blind to others.

There are several aspects of this.  One of these is what economists call “externalities.”  These are impacts of market transactions on people or systems that are not party to those transactions.

Here’s a passage from the book which examines this problem.  It begins with the problem of ice on the roads in winter, and what solutions people choose for dealing with the problem.  The market gives out information through its pricing.  The market ideologues treat “market prices” as embodying great wisdom.  But the blind spots corrode that wisdom significantly.

“Rock salt is quite effective in keeping both private driveways and public highways from icing up… The runoff of the salt, he explained, causes damage to underground cables, car bodies, bridges, and groundwater. The cost of these damages is twenty to forty times the price of the salt to the person or organization buying and using it… There is an alternative product to rock salt that produces no such damage from runoff. It is called CMA, and it costs a good deal more than the salt. It costs less, however, than the damages the salt inflicts. Yet, as Morris writes [in a Washington Post article], ‘No highway department, homeowner or business would purchase large quantities of CMA today even if it were widely available, because the individual doesn’t care about cost, only price.’

Rock salt is an example, but (I continue):

“How is rock salt different from a million other things we use and countless things we do except, perhaps, in degree? The cost of rock salt is many times higher than its price. But are not the costs of most things we consume in our economy higher than their prices? Everything that in production or use involves the consumption of carbon-based fuels is contributing to the greenhouse effect, which, according to present scientific consensus, threatens disruption of the global climate and possible world-wide famine within a human lifetime.”

The market ideologues, like Milton Friedman, know about the problem of externalities. But they don’t seem to recognize how significant are the implications of this problem for their overall rationale for putting our destiny into the hands of the market.

Those of the Milton Friedman school just don’t seem to realize that these externalities are so pervasive that, like so much rock salt sprinkled liberally across the landscape, they rust out the iron-clad logic of the market ideology. As a result, many of their ideological assumptions become questionable.

(1) If important costs and benefits are disregarded in market transactions, how meaningful are the values that the market assigns to the goods exchanged, and what happens to the market’s claim of efficiency?

(2) If nontransactors must suffer damages to which they have not consented, what happens to the claim that the market metes out justice? And, finally,

(3) if each of us is the unwilling victim of countless transactions in which we have no say, how well does the market protect the liberty of any of us to choose our destiny?

In the context of “Swinging for the Fences,” and our exploration of systemic forces that must be controlled or overcome if we are able to create a future we would desire, the bottom line is this:  we use an economic system that, unless we correct for its defects, will drag us into a future in which those values that get attended to in transactions between buyers and sellers get magnified in importance, and those values that fall outside the concerns of the immediate parties to the transaction will be neglected.

This leads to a society whose mix of wealth and poverty is warped and unbalanced, and suboptimal for human fulfillment.

The Series Is Introduced with These Entries:

Swinging for the Fences: Please Join Me in this Bold New Effort

Swinging for the Fences: The Fable of the Magnet

The First Round on the “Magnets Consisted of These:

An Unwelcome Driver of Social Evolution: The Parable of the Tribes

Swinging for the Fences: How the Market Economy Shapes Our Destiny

Swinging for the Fences: Polarization as a Form of Cultural Breakdown

Swinging for the Fences: The Transmission of Culture Through Time

Then There Were a Few Improvizational Offerings;

A Sick and Broken Spirit

Swinging for the Fences: Hunting for Very Big Game

Problems in the Religion Are Symptoms of Something Deeper

Second Round on the Four “Magnets”:

Swinging for the Fences: The Parable of the Tribes–Step One A Breakthrough Unprecedented in the History of Life

Swinging for the Fences: The Parable of the Tribes– Step Two: The Circumstances from the Human Breakthrough Make the Struggle for Power Inevitable

Swinging for the Fences: The Parable of the Tribes–Step Three: Selection for the Ways of Power

Andy Schmookler, an award-winning author, political commentator, radio talk-show host, and teacher, was the Democratic nominee for Congress from Virginia’s 6th District.  He is the author of various books including Fool’s Gold: The Fate of Values in a World of Goods.