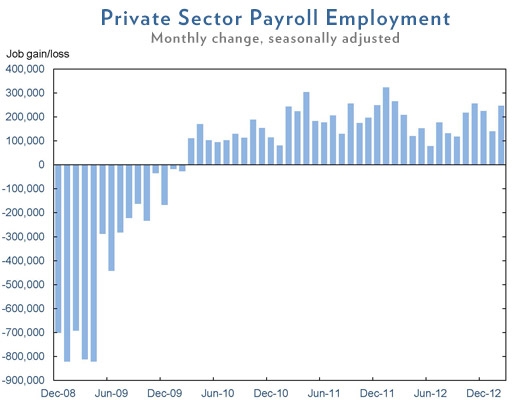 That crazy “socialist in the White House” (that was snark; in reality, of course, Obama’s about as middle of the road as you can get) and his wild-eyed economic policies are at it again!

While more work remains to be done, today’s employment report provides evidence that the recovery that began in mid-2009 is gaining traction. Today’s report from the Bureau of Labor Statistics (BLS) shows that private sector businesses added 246,000 jobs in February. Total non-farm payroll employment rose by 236,000 jobs last month. The economy has now added private sector jobs every month for three straight years, and a total of 6.35 million jobs have been added over that period.

The household survey showed that the unemployment rate fell from 7.9 percent in January to 7.7 percent in February, the lowest since December 2008…

In other words, the Obama recovery continues, in spite of the best efforts of Republicans to derail it. Latest example: the brain-dead sequester, which was a direct consequence of the Teahadists’ wild irresponsibility in holding the nation’s credit rating hostage in July 2011. In addition to the adverse impacts of the sequester in the short term, including a potential reduction in the U.S. economic growth rate for 2013, there’s also the long-term adverse impact of reduced investment in the things we should be investing in – our infrastructure, clean energy, education, etc. In other words, it’s Obama and his middle-of-the-road, balanced approach versus the discredited trickle-down/supply-side voodoo economics of John Boehner, Mitch McConnell, Eric Can’tor et al. I know which one I prefer; how about you?

P.S. Another reason to be thrilled that Willard lost the election in November is that he’d now be taking credit for a recovery that has occurred 100% on a Democratic president’s watch.