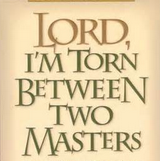 As often happens in gubernatorial races, the difference between winning or losing doesn’t rest on substantive positions, TV ads, big-time endorsements, turnout organization, candidate charisma, etc. Rather, it comes down to a basic “process” issue. That is to say: the fatal problem starts with a fundamental mistake on how one organizes one’s campaign.

A textbook case in point is the 2013 Ken Cuccinelli for Governor campaign. The more I study it, the more convinced I am of the following: there is a fundamental flaw at the heart of the campaign, one which no TV ad, no issue position, no fundraising, no nothin’ of the sort, can fix. Mr. Cuccinelli created it.

The problem: Cuccinelli forget to the read the Bible. Specifically, Mathew 6: 24, wisely addressing the age-old problem of whether a man can serve two masters. Since the campaign year officially began on January 1, there have been two people running for the GOP nomination for Governor: Attorney General Ken Cuccinelli, and Governor guy wannabe Ken Cuccinelli.

As a matter of law and substantive work as regards the office of Attorney General, it is possible for these two Ken Cuccinellis to serve the same master: that is to say, the god of gubernatorial campaigning. With all due respect to the AG and his staff, it ain’t that hard being the AG. It ain’t that hard as regards the substance of running for governor. So as a legal matter, as a substance matter, it is easy to be AG and run for governor at the same time. The gods accept that, no big deal.

They do it in every other state. So when Mr. Cuccinelli, supported by Professor Sabato and others, said the state’s tradition of having the AG resign to run for governor made no legal or substantive sense, they had a good point. Cuccinelli and Sabato were absolutely right.

But Professor Sabato was not endorsing Cuccinelli’s decision to break with the tradition.  Hardly. He was only saying the tradition made no sense as a legal and substantive. He was only saying it made no sense as a political matter, per se.  But Professor Sabato was not addressing the issue that mattered most: whether, as a practical matter, Ken Cuccinelli was capable of doing it. Sabato didn’t address the specific, only the general.

What do I mean? It is clear to me now that Mr. Cuccinelli believes he is capable of being two different people at the same time, keeping both identities separate and apart. He believes he can be AG, doing the job independently of any connections to his ambition to be governor. In addition, he believes he can separate out his Cuccinelli for Governor existence from his AG’s role.

Accordingly, Mr. Cuccinelli is a man trying to serve two masters at the same time: and the gods of gubernatorial campaigning are bemused that a human would dare think this was possible. This is a godlike power. They aren’t happy with him for claiming he can do it. The results speak for themselves.

Fact: The campaigns of Attorneys General running for re-election, or running for governor in other states ARE RUN OUT OF THEIR AG OFFICES. Yes, they have a campaign staff, a campaign office, a campaign manager, whatever. But the politics, the guts of the campaign, is run from INSIDE THE AG’S OFFICE. Trust me: That is the way the game is played. There is no other way to do it.

For some reason which defies both experience, logic, and frankly gut common sense, Mr. Cuccinelli believes differently: he believes he can be both people at the same time. NOT POSSIBLE.

As I say, the issue is not whether you can do the work of AG and the GUV GUY wannabe at the same time. It is not a WORK PROBLEM. It is a PROCESS PROBLEM. There can be only ONE MASTER. And it has to be the person who runs your politics. He or she will have to able to be a lawyer and a political person, so it ain’t easy. But it is what it is.

America and the allies had many top generals  in WW2. But Ike was the boss of the boys fighting Hitler. It was his way or the highway. He wasn’t the best general, nor the best politician. But he was the perfect leader.

The last 4 months of the AG’s campaign for governor, and his tenure as AG, is a textbook example of why Mathew 6:24 was the wrong lecture for Cuccinelli to miss growing up. Mr. Cuccinelli says he will not resign. That’s his call. It might yet work out for him. But unless he solves his two-master problem, he has created a process that so far has only produced one political mistake, indeed legal mistake, after another.

To quote singer Lorrie Morgan: “What is it about NO that you don’t understand?”