Six years ago, my daughter Emily was in French class at Virginia Tech when a gunman opened fire, ultimately killing 32 students and staff members. Emily was shot twice in the back of the head but survived.

In the wake of our collective horror and shock, as we asked how can something like this happen, a review panel was assembled by then-Governor Tim Kaine to figure out what needed to change so that never again would this happen.

That review panel, among other things, recommended universal background checks.

Virginia should require background checks for all firearms sales, including those at gun shows. In an age of widespread information technology, it should not be too difficult for anyone, including private sellers, to contact the Virginia Firearms Transaction Program for a background check that usually only takes minutes before transferring a firearm. The program already processes transactions made by registered dealers at gun shows. The practice should be expanded to all sales. Virginia should also provide an enhanced penalty for guns sold without a background check and later used in a crime.

But six years later, nothing has changed and more than 187,000 people have been killed by guns.

Today, the U.S. Senate is expected to vote on a compromise to improve background checks in this country. Depending on which news report you read, it’ll either be a close vote or it’s going to lose.

However, no matter what happens today, we must keep working and fighting. We can’t let another six years go by without anything changing.

I’m on the Hill today with survivors. Stand alongside those of us from Virginia Tech, Tucson, Aurora and Newtown, and join us by calling your Senator today to ask them to vote yes on the Toomey-Manchin amendment to expand background checks on gun purchases. 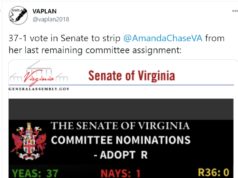 The fact that a McGuireWoods lobbyist right now is testifying in support of @DominionEnergy highlights everything wrong with the pay-to-play "Virginia Way," and why the State Senate needs to vote FOR Sen. @ChapPetersen's bill preventing Dominion from trying to buy the legislature