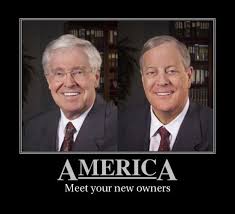 Now, Koch Industries, the sprawling private company of which Charles G. Koch serves as chairman and chief executive, is exploring a bid to buy the Tribune Company’s eight regional newspapers, including The Los Angeles Times, The Chicago Tribune, The Baltimore Sun, The Orlando Sentinel and The Hartford Courant.

These are the men who have worked with governors like Walker in Wisconsin to take power from workers –kicking them when they’re already down– to enrich the rich still further.

These are the men who fund climate-change denial, oil billionaires willing to sacrifice the future of generations to come and the health of our planet to keep the mega-profits coming in from the fossil fuels they sell.

How much damage has been done to America already by Rupert Murdoch and his empire of right-wing propaganda?  Can we afford to have another powerful channel of the same kind of destructive spirit take over still more of the organs of public consciousness?

Can our democracy survive not just streams but vast rivers of lies flowing into the reservoir of American understanding?

No Excuse: New Ad in VA-07 Hits Freitas for Votes Against Kids With Autism, Background Checks for Daycare Workers

VA01 Dem @QasimRashid calls out Rep. Rob Wittman (R-VA01)'s "stunning hypocrisy" on the Supreme Court. In 2016 - Wittman said do NOT confirm a new SCOTUS nominee close to an election; in 2020 - DO confirm a new SCOTUS nominee much closer to an election! https://bluevirginia.us/2020/10/tuesday-news-americas-third-covid-19-surge-is-here-barretts-confirmation-is-proof-that-norms-are-dead-how-an-anti-democratic-constitution-gave-us-amy-coney-barrett#comment-5127057113